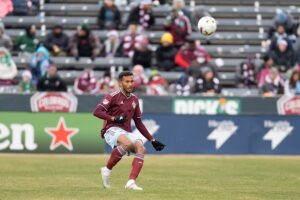 COMMERCE CITY, Colo. – Colorado Rapids hosted Sporting Kansas City on Saturday night in a key early season match in the MLS Western Conference. Both teams were dealing with injuries. Danny Wilson did not make the team due to a hamstring injury he sustained last week. Golden Boot candidate Daniel Salloi was missing for Kansas City. Would the Colorado Rapids set piece attack finally come alive and get a second straight win?

Diego Rubio had the first good chance of the half in the 14th minute. Mark-Anthony Kaye crossed the ball into the box as Rubio timed his run. He went for a volley first time but was off target.

The striker made up for the mistake in the 21st minute. Playing quickly in transition, Lucas Esteves dribbled forward and cut inside. He threaded the ball through the defense as Rubio found a gap. He took a touch then slotted the ball past Tim Melia.

Minutes later. Melia came off him line to save Michael Barrios on a breakaway.

Sporting grew into the game after that. Cameron Duke, who subbed in for Felipe Hernandez had the best chance on a shot in the 38th minute from inside the box but it went out for a corner. There were several threatening corners. On one in the 41st minute, the ball went off Keenan Rosenberry, forcing William Yarbrough to reach for the ball, saving it right on the goal line.

Colorado relieved pressure six minutes into the second half with their first set piece goal of the year. Jack Price took a corner that found the feet of Steven Beitashour. He put the ball towards goal and Mark-Anthony Kaye redirected it past the keeper from inside the six.

Esteves was subbed out after an hour, having sustained an injury while taking the ball from Johnny Russell and then playing the ball out as he went to ground. The Sporting captain had a tough night as Rapids defenders took the ball off him in and around the box. Chemistry was clearly lacking with newcomers Nikola Vujnovic and Marinos Tzionis starting up top.

The final half hour of the game was uneventful. Former Rapids Homegrown Kortne Ford made his debut for Kansas City, subbing on for Andreu Fontàs in the 81st minute. The match ended 2-0.

Diego Rubio again: Rubio scores his second goal and third goal contribution in two games. He was hot in the preseason and despite not scoring in CCL, he’s picked up his finishing. Colorado will need this to succeed going forward.

Organization at the back: This match was a battle of Colorado missing their most important defender in Wilson while KC were missing their key goal scorer in Salloi. Colorado won this matchup by staying organized and forcing anyone but keying on Russell.

Injury substations: Duke was a bright spot with two chances from the run of play. Colorado adjusted well after Esteves was subbed out with Drew Moor keeping it simple and clean at the back.