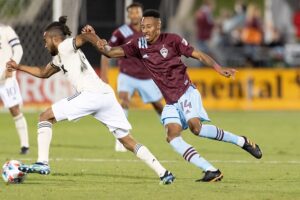 With these moves, the Rapids have secured their veteran core. Padraig Smith told the media on Wednesday afternoon that locking down “the spine of the team” long term was a goal for this offseason. All five of these players will be in Burgundy and Blue through 2023. The four re-signed players can be retained through the end of 2025.

to recap, the @ColoradoRapids today announced:

Rosenberry has been one of the most reliable right backs in MLS. Wilson has improved every year he’s been in MLS. Both have become good mentors and leaders for younger defenders. While those players may come and go, they are the stabilizing anchors of the back line, along with goalkeeper William Yarbrough.

Smith called Price the “heart beat” of this team. He isn’t going back to England anytime soon and is poised to lead the club as captain going forward. He and Wilson are in the process of getting their green cards according to club sources. Should they become domestic players, they’d be two of the best value two-way players at their positions in the league.

Kaye is the youngest of these five at 27-years-old. Moving to Colorado from LAFC rejuvenated his 2021 season. He brings something different from the run of play in the final third. He is very much set up to succeed in MLS and become a key part of the midfield for his Canadian National Team.

Bryan Acosta is roughly the closest equivalent to Kellyn Acosta currently on the roster. The coaching and scouting staffs are confident he can fit the system and make an impact, albeit not in the exact same way as Kellyn.

Attacking pieces are still needed. There are still questions about how the club will adjust to the departures of Kellyn and Cole Bassett. But the foundation is there and it is strong.

All five of these players are still in their prime window age wise. Wilson is the oldest, having turned 30 last month. They’re all now under contract with the club for the duration of those prime years. The Rapids Way is setting up to bring in and move young players along.

This counsel of elders can be the foundation for prolonged success on the field while also paving the way for those youngers to succeed and move on.

The post Colorado Rapids Secure Spine of the Team With Recent Contract Extensions appeared first on Last Word On Soccer.