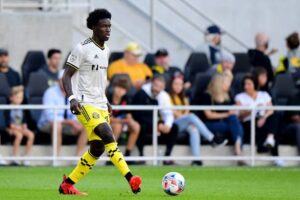 EDITORIAL – The Colorado Rapids announced the acquisitions of center back Aboubacar Keita and midfielder Max Alves da Silva (“Max”) this week. Max has signed a four year deal with a fifth year team option on a U22 contract. He will not be a Designated Player in 2022. Keita was acquired for up to $450K in allocation money from Columbus Crew. Keita is under contract for this year with a team option for 2023. His guaranteed compensation was $110K in 2021.

Now, what do these two players bring to the Rapids? What affect will they have on the midfield and backline, respectively? What do these signings mean for other player transactions this offseason?

Here’s the obligatory highlight film of goals, flicks, and tricks. Unfortunately for some reason, there’s no techno music.https://t.co/3xXElFlgna

He’s creative in the final third and likes to deliver the unlocking pass to create chances. From midfield, he can run out wide to find space in transition, usually to his right. This would complement what Lucas Esteves does on the left and create a channel to Michael Barrios on the right for Colorado. He’s got flair for the spectacular.

Keita is a Crew academy product. He’s been mostly a backup center back option for Caleb Porter. He wouldn’t have had too much overlap with Lalas Abubakar with the Black and Gold first team, as Lalas was on loan with Colorado for much of 2019 (Keita’s rookie year). He had 10 starts and 16 appearances last season. His biggest defensive stats were ball recoveries (45) and clearances (36). Per American Soccer Analysis, his highest goals added category was interrupting with 0.72, not bad. Overall, he had a G+ of 0.19, so he was slightly above average.

How They Fit In:

In terms of player type, Max is what the Rapids have needed in a No. 10. He doesn’t appear to be the one trick pony that Younes Namli was (great taking on a defender while dribbling, not elite elsewhere). He brings something different compared to Mark-Anthony Kaye (more direct) or Cole Bassett (more of a late runner). The club’s been successful in their scouting and network in South America. Ex: Braian Galván and Esteves.

In terms of age and potential, he fits the player archetype the club has pursued in recent years. I can count on one hand the number of times the Colorado Rapids have spent a (reported) $1 million or more on an international transfer. Padraig Smith would not spend that amount of money unless it was a sound investment. Robin Fraser’s center midfield core is now as versatile as Batman’s utility belt.

Great influence too. Good kid. Young and eager to learn. Think having Lalas will be a good influence for him.

Keita is Fraser’s next center back project. Every defender Fraser has coached in Commerce City has improved under him. The 21-year-old is facing an uphill battle for minutes in 2022. Keita will be in a great competitive and mentoring environment, especially if Drew Moor returns to the club.

His production on the ball and on attacking set pieces need work. He’s already a decent defender. That will be improved working alongside Danny Wilson and Abubakar. He’ll get minutes this year but likely will be a complementary piece taking directions rather than an influential leader in defense. If he buys into the culture and process, he’ll be another win for Revenge of the Island of Young Distressed Assets FC.

The Rapids still have Bryan Acosta’s rights. They are still negotiating with midfielder Nicolas Mezquida and center backs Moor and Kortne Ford. They now have seven central midfielders on first team contracts. I don’t see them signing both Acosta and Mezquida.

Eight central midfielders for three or four starting spots, depending on formation, could work temporarily. Oliver Larraz and Philip Mayaka could go out on loan again. If Bryan Acosta is that eight player, the Rapids will have three regular internationals at this position, Kellyn Acosta and Mark-Anthony Kaye being the others. This could work squad rotation wise for a year or part of it. From what I’m hearing, I still doubt Cole Bassett leaves this transfer window, but it’s probable both he and Kellyn Acosta are sold before the start of the 2023 MLS season.

Fraser did play with a back three at times this year. Including Keita and Keegan Rosenberry, they have six players who can play center back, for at most three starting spots. Auston Trusty could be on the move sooner rather than later. I doubt Trusty stays this transfer window AND both Moor and Ford re-sign with the club. I just don’t see the Rapids carrying eight center backs on their roster. Trusty seems like the most likely Rapid to be sold abroad this January. If that happens, Ford and Moor easily come back.