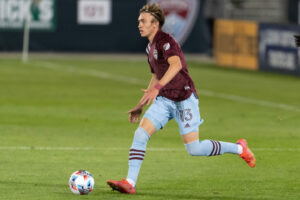 PREVIEW – Colorado Rapids host the Houston Dynamo this Saturday at Dick’s Sporting Goods Park in Commerce City, Colorado. Neither team has had a bombastic start to the season yet both find themselves in playoff position – albeit very early in the season.

While Houston has quietly and consistently picked up points in about every game, the Rapids in contrast have seen much less consistent results.

Of the five matches played by Houston so far this season, they’ve won two, drew two, and only lost once. The wins came against Sporting KC and San Jose, and the ties were against LAFC and FC Dallas – neither of whom are slouches. Their only loss was given to them via their first away game, and in Portland no less.

Despite that slate of quality Western Conference opponents, Houston Dynamo have managed at least one goal a game (their only two-goal game was in their opener against San Jose). The Dynamo have spread the chances around in these games, with only one player with multiple goals: Maximiliano Urruti with two goals so far this season.

Urruti is usually found in the center of their front three, with Houston consistently going with a 4-3-3 formation in every game except their loss to Portland. We can fully expect Houston to be playing in a 4-3-3 against Colorado this weekend.

Colorado Look To Continue Bounce Back From Poor Start To Season

Colorado has also had a 4-3-3 formation as their default, however that sometimes looks like a 3-5-2 with right back Keegan Rosenberry shifting into the third center back and allowing left back Sam Vines to get high into attack.

Sam Vines was absent from the Rapids first two games. In those two games they tied 0-0 against FC Dallas and then suffered a 1-3 defeat in their home opener against Austin FC, gifting the team their first goal and first win in MLS history.

The Rapids have won both games since the return of Vines, which has allowed Kellyn Acosta to move back to his box-to-box midfield role rather than be a stand-in left back.

Acosta has come back to his box-to-box role with a vengeance, scoring this goal of the week contender in the comeback against Minnesota United.

The Colorado-Minnesota game started like a bad dream for Rapids faithful, who watched the Loons trounce their burgundy boys 3-0 in the playoffs last season. When Minnesota went up 2-0 24 minutes into the game, it looked to be a repeat of last season.

The Rapids didn’t start to turn things around until Cole Bassett was subbed in for the Rapids only designated player, Younes Namli. Bassett has recently found himself out of a starting position in a crowded midfield that can only fit three of their four best options in Jack Price, Kellyn Acosta, Namli, and Cole Bassett.

Last season, Namli often played in a wing position, allowing Bassett to make those beautiful late runs into the box to score. With the addition of Michael Barrios, who joined the team with a head full of steam, that has pushed Namli into a more central role and ousted Bassett from a starting position.

Given the spark the young central mid brought when he came in and helped lead the comeback against Minnesota, I would not be surprised to see Bassett get the start, particularly if Namli isn’t fully recovered.

The Rapids have not had a shutdown defense yet this season. They’ve missing some of their starting back line and haven’t gotten into a rhythm, so there will be goals on both sides of the ball.

My prediction is a 2-1 win for the Rapids.