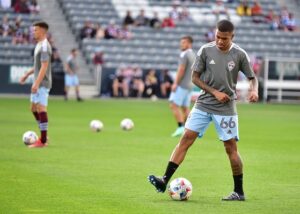 PREVIEW – Colorado Rapids play today at Sporting KC. The Rapids have been on a tear through MLS in the last two months. They recently won three matches in eight days. They’re finding joy and pride in the process ahead of another measuring stick game.

“There was a similar process to go from a team that wasn’t a great team to a team that’s more competitive at the top of the league. And I feel like we’re going through some of that now. There is maybe a little bit more pride as the head coach, because you feel like hopefully you’ve steered that in this direction. I’m especially proud of with not only with the team, with a good group of guys, but I feel like I don’t talk about the staff enough. And the staff is incredible,” Rapids head coach Robin Fraser told Last Word.

The Burgundy Boys have taken care of business against the teams they should beat this year. Against non-playoff teams at home, they’ve usually won. Against teams below them in the table, they’ve gotten results on the road. Colorado increasingly is looking like a team that could win MLS Cup.

That said, the three teams that consensus better than them are New England Revolution, Seattle Sounders, and Sporting KC. They’ve played three games total against Seattle or SKC. In two home games, they’ve drawn against reserve teams. In their only road game at Children’s Mercy Park, they had their biggest loss of the season.

“I think Kansas City is a team that’s been one of the top teams in the league for almost a decade now, and they’re well coached and they’re well drilled. It’s a really, really tough game for us. It’s another measuring stick because if you can win some of those games, it certainly gives you confidence for giving your team the confidence that they can win anywhere,” said Fraser.

Colorado’s grown since the August 7 0-0 draw at home against today’s opponent. Kellyn Acosta is back in the midfield, which has been upgraded by the acquisition of Mark-Anthony Kaye. Despite the loss of Gianluca Busio, the midfield continues to be productive. This could be a battle within the war.

New left back Lucas Esteves was on the bench for the first time last weekend in the Rocky Mountain Cup. He’s started to get integrated into the team, though fellow Brazilian Andre Shinyashiki has been translating for him when needed. Fraser anticipates Esteves will make his debut in the near future.

If Esteves starts tonight, it will open things up tactically for the Rapids. They’ll play the 3-5-2 formation better with an improved midfield and a natural left back to fill the Sam Vines sized hole. Or, it’ll allow them to play in the 4-3-3 and be more on the front foot to take it to SKC.

Either way, the club will be better off the sooner Esteves gets into the starting lineup.

The post Colorado Rapids finding pride and joy ahead of measuring stick game at SKC appeared first on Last Word On Soccer.