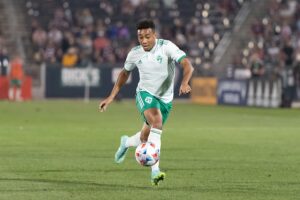 EDITORIAL – The Colorado Rapids sit fourth in the MLS Western Conference. They’ve been a consistently good side, beating the teams they are supposed to beat and picking up points elsewhere. By talent, star power, and money spent, they’re punching above their weight about as well as any other club in MLS. But Saturday’s 0-0 draw at home to Sporting KC left Colorado Rapids disappointed. Lessons are being learned and need to be applied.

Failing the initial “benchmark test against Seattle and Sporting:

The two draws came at home against Seattle Sounders and Sunday’s match against SKC. In both games, Colorado noticeably outplayed a reserve lineup but could not get the win. The performances were encouraging. The fulltime scoreboards, less so.

The first real test of the season as to whether the Pids were legit contenders came in back-to-back games on June 23 and July 4. Those ended up being a 3-1 loss at SKC and the aforementioned draw to the Sounders.

Head Coach Robin Fraser framed this two game stretch as a measuring stick of where his club was at, describing the game at Blue Hell specifically as “a huge test for us. We’ve had some decent performances but you always look at certain teams as a benchmark. This is one of them.”

The Rapids failed that two-game test. Fraser’s main message to the team was “we need to be more clinical in front of our goal and in front of their goal.”

Diego Rubio, who was interim captain for the Seattle game, had a similar message of encouragement saying “we showed up in this game. We can finish better. Other teams, they can’t create chances against Seattle. We did it. We need to get better.”

In the month of July, they did just that. For each mistake or poor game, Colorado bounced back the next game. The beat Minnesota 2-0 at home. A 1-1 draw with San Jose was followed up by a win over Dallas that was all about adjusting and responding to adversity. The 3-0 loss at Real Salt Lake led to a gut check win in Austin.

“It was a real sign of grown and maturity. We do and [the players] do learn lessons from previous games. They can take bad scenarios and turn them into future good scenarios,” said Fraser.

Was the team still a bit inconsistent? Yes. Were they making incremental improvements while picking up results? Yes. And all while they were shorthanded with Kellyn Acosta, Sam Vines, and Jonathan Lewis with the USMNT for the Gold Cup.

Saturday presented another benchmark game in the context of the team as a whole AND its growth since the 4th of July. They dominated a reserve lineup from Sporting, but Tim Melia stole the game. It left the club “disappointed” even with another quality performance. Regardless of the up-and-down results, the team has been making improvements and dealing with inconveniences on the fly. And doing it well. But the team’s poor finishing is still a concern and the lack of a big money match winner compounds that relative to the competition.

“It’s about how this team has grown period. When they’ve had to face adversity, they’ve been resilient and bouncing back even if we haven’t played particularly well. This team is in the process of getting to where we want to get to.”

That’s what Fraser said when asked about the difference between the first and second SKC matches as a measuring stick. The club has 18 regular season games left to get through the process to get to where they want to be. Just in time to make the playoffs and be ready for a season-defining benchmark test:

A playoff game against one of these elite teams with a chance to win MLS Cup on the line.