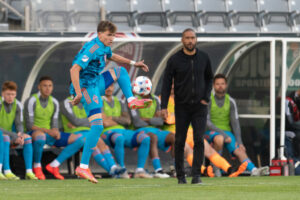 COMMERCE CITY, Colo. – For the first time since the home opener last season, the Colorado Rapids will play a match with a full capacity DSG Park. On Sunday, they host Seattle Sounders in their traditional 4th of July game. Social distancing-pod seating is gone. The C38 tailgate is back. Fireworks are back. Potentially 18,000 Pids supporters will be back.

“We’re incredibly excited to be welcoming the fans back in full on the 4th of July. This is something we’ve been looking forward to since March 13th of last year [the 2020 home opener, last game with a full capacity DSG Park],” Executive Vice President and General Manager Padraig Smith told Last Word.

For the first time since 2011, #Rapids96 are not playing a home game on July 4th. They played on Sunday the 3rd against Houston that year.

This is the first time in their history they do not have a home game on the 4th or the weekend of.

As exciting as this is for the players, staff, and supporters, it will need to be executed well. Keep in mind, the Rapids had one of the worst COVID-19 outbreaks in American Sports last year.

They went a month without playing a game between late September and October. Five games got canceled. Drew Moor almost served as a player-coach for a game with the entire coaching staff testing positive.

Last Word can confirm that the CDPHE did a thorough review and they could not find the source of the outbreak or any protocol violations that started it.

“We’re fortunate that we are part of one of the largest sports groups in the world [KSE]. We can share knowledge and resources across the group. With venue specialists, it puts us in a strong position to make sure we’re doing this the right way. The health and safety of everyone involved whether it’s the supporters, staff players, media is the priority. Doing this the right way was always the number one goal. We have a strong relationship with the local health authorities.”

Within KSE, the Nuggets and Avalanche had reduced capacity crowds for their home playoff games in the indoor Ball Arena. A healthy relationship with the local and state health authorities going back to last year will prove valuable as the club welcomes back supporters to a safe stadia environment, that also makes them feel safe.

Head Coach Robin Fraser is excited to have a larger crowd, allowing the Rapids to feed off that energy. How important could that be against the Sounders, who are the only undefeated team left in MLS?

“Critically important. We feed off their energy. We’ve experienced that (on the road recently). It’ll be even better to have that atmosphere supporting us and driving us forward,” said Fraser.

A potential sellout crowd could have even more significance, as the Rapids will welcome back former player and coach, Pablo Mastroeni, who’s #25 is set to be retired after the match along with the firework show on Sunday.

The post Colorado Rapids are Prepared and Excited for Full Capacity DSG Park on Sunday appeared first on Last Word On Soccer.