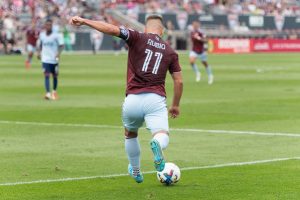 COMMERCE CITY, Colo. – The 2022 Colorado Rapids failed to make the playoffs this year. They finished 10th in the Western Conference, four points off of the playoffs. Injuries to Jack Price and Braian Galván, among others, hurt the team’s quality and depth. Every defender regressed from last year. The departures of Cole Bassett and Kellyn Acosta left the midfield thin and limited. They were poor on the ball, defensively in transition, and on set pieces. Diego Rubio had his best offensive year ever, but his support was limited. Gyasi Zardes was helpful with nine goals as the DP forward signing, but more was needed from everyone. They traded Mark Anthony-Kaye in the summer hoping it would give them the flexibility to improve the team for the short and long term. That never materialized.

Was there any doubt? From the first day of preseason, he was goal hungry and tenacious. His Concacafing was excellent this year and mostly helped the team. He was the single consistent chance creator from the run of play and made all the attackers around him better. His poacher skills were on point. He became dangerous on free kicks. At 5’11”, he beat out taller defenders and goalkeepers to headers for goals, often outnumbered. He was emphatic with the few penalties he took. Other than not being physically imposing as an undersized No. 9, he was a complete striker.

The Zardes trade saw him move into a central midfield role without complaint. The 29-year-old worked tirelessly. His pressing and linkup play were excellent. His versatility proved invaluable as he anchored a midfield needing intensity and leadership. All the while, he was the conduit for chance creation. He recorded 16 goals and seven assists. In the final minute of Decision Day, we got his 16th, tying Conor Casey’s 2009 season for the most goals in a single season by a Rapids player. Given the lack of help around him, this is the most impressive individual season for a forward in club history.

Game of the Year:

I’ll pick two games for different reasons. May 14, a 2-0 win against LAFC, and August 2, a 5-4 thriller at New York Red Bulls. LAFC lost just nine regular season games. The Rapids took it to the Supporters’ Shield winners that . They won two deserving penalties and limited Los Angeles attacking wise. It’s one of the worst games I saw Carlos Vela play this year. Granted, this was prior to LAFC going Galacticos. This was a complete performance against one of the best teams in the league, regardless.

The Tuesday night nine-goal thriller against Red Bull had everything, except defending. New York opened to a 2-0 lead with the Rapids defense out of sorts. Lalas Abubakar almost got sent off for DOGSO. Colorado managed three goals in 22 minutes with Collen Warner of all people scoring. Dantouma “Yaya” Toure had a goal disallowed before scoring the actual winner in the 89th minute. A penalty for RBNY and an offside goal made for more drama in stoppage time. This game showed the resilience and collective of the Colorado Rapids. It showed their opportunism against a weary opponent who had a bad night. It was a spectacular season despite the eventual disappointment of the season.

As mentioned above, Rubio was great. They were a good home team, with a 10-2-5 record. Robin Fraser had his team motivated and feisty. The effort and intention were there most of the time. They played well and got results against bad teams, especially at home. In addition to Rubio leading the attack, Zardes contributed nine goals, most after good team play. They were decent enough at times playing out of the back when teams did not high press. Danny Wilson started his fair share of attacks with long passes to Jonathan Lewis, Michael Barrios, and Lucas Esteves.

Lalas Abubakar was a bright spot on set pieces, contributing five goals and one assist. He was aggressive and clinical on set pieces. He even scored on a few volleys that any striker in MLS would be proud of. Bryan Acosta was forced into a difficult position, the No. 6 spot with Price out for two thirds of the season. He did well at times, but was no Captain Jack. Several young players also took steps forward in their careers with Darren Yapi and Toure making MLS debuts. Ralph Priso seems to be a nice puck up from Toronto but got limited minutes.

Pretty much everything else. Defensively, the entire backline and William Yarbrough regressed. Auston Trusty was not good in the first half of the season once the move to Arsenal was confirmed. A viable third center back did not materialize after his move as Gustavo Vallecilla disappointed with two red cards. The marking on set pieces was poor at times. A group known more for preventing fires than putting them out allowed more fires to start and burn them.

The midfield was the weak as well with Price injured and several transfers out. Kaye wasn’t great while he was here. Loaned 32-year-old Felipe Gutiérrez plugged a hole late in the year and impressed. Acosta and Bassett couldn’t be replaced or replicated. Oliver Larraz’s injury hurt the depth. The lack of a stable midfield left the attackers with little support and exposed the defense to its key weakness.

To from Western Conference champions to out of the playoffs is a failure. The Rapids should be healthier next year. The young players will be given opportunities. GM Padraig Smith needs to make two significant signings in January. There’s a big decision to make on Zardes’ future. If the players who had down years bounce back, they should make the playoffs in 2023. This club has a clear ceiling though as long as KSE limits them financially.