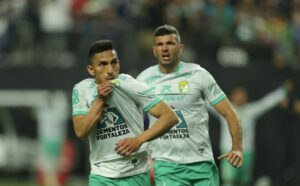 Leagues Cup has its winner. In 2019, the inaugural Leagues Cup featured two Liga MX teams in the final. This year — after halting the tournament last year due to the COVID-19 pandemic — the Seattle Sounders clinched a spot in the final. They did it after defeating Santos Laguna in the semifinals. However, they could not top Club León — who currently sit in fifth place in Liga MX.

The match got off to a chippy, gritty start, as most do between MLS and Liga MX teams. A total of four yellow cards was given out in the first half, three for the Sounders. It only took 10 minutes for Xavier Arreaga to see yellow, although the call was certainly questionable.

CRISTIAN ROLDAN YOU BEAUTY@SoundersFC have the opener in the Leagues Cup final! pic.twitter.com/0zTvV6XXmA

After a lackluster first half from Seattle, the Sounders came out swinging in the second half. In the 47th minute, Cristian Roldan scored off a Jimmy Medranda assist, sending the ball to the top of the net on a one-touch hit inside the box. However, the lead didn’t last too long for the Sounders, as Ángel Mena tapped in, wide open, his shot past Stefan Frei.

The game-winning goal came from Mena, the Ecuadorian international, after slotting home a penalty past Frei. The penalty was given up by Shane O’Neill, who fouled Mena with a poorly-timed sliding tackle.

Will Bruin scored a consolation goal for Seattle in the waning minutes, but left it at that: consolation. A final attempt from the Sounders offense was cleared away by Club León, who saw more time added on to the extra four minutes due to some time on the ground.

Never say never…@SoundersFC get one back in stoppage time. pic.twitter.com/ICQaB78ShI

What’s next for the Sounders?

Seattle now eyes league action against Sporting Kansas City, which will take place on Sunday at 7 p.m. EST. Meanwhile, Club León will head back to Mexico with another trophy in a Concacaf competition in yet another victory over an MLS team. Club León faces Atlas on Saturday.