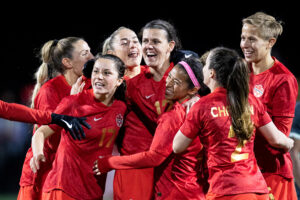 LANGFORD, BC – Christine Sinclair scored her 189th goal as the CanWNT earned a 2-2 draw with Nigeria at Starlight Stadium. Within most of the game, the CanWNT trailed behind Nigeria. However, they were able to come back and score twice as both teams shared spoils in Langford, BC.

Both the #CanWNT and #SoarSuperFalcons had five shots on goal.

Both #Canada and #Nigeria made defensive mistakes at #StarlightStadium.

back heel has the Super Falcons ahead of the reigning Olympic champions going into halftime!#CANvNGA | 0 – 1 pic.twitter.com/ODMDVEIKwv

Canada dominated the possession since Nigeria took the lead but has not been able to break through Nigeria’s defence. Adriana Leon’s shot was stopped by the Nigerian goalkeeper, Chiamaka Nnadozie, in the 19-minute of play.

CanWNT goalkeeper, Kailen Sheridan, claimed the ball in the 31-minute of play. Shelina Zadorsky’s shot was too high and easily collected by the Nigerian goalkeeper.

Nichelle Prince’s cross in the 33-minute was defended well by Nigeria. In the 37-minute, Janine Beckie almost scored in the 36-minute. Adriana Leon’s shot in the 42-minute missed the target. Jordyn Huitema made a run in the 44-minute of play and Nigeria made a good defensive play to prevent her from scoring.

49’ It is #ChristineSinclair‘s 189th goal for the #CanWNT! She ties the game as she takes advantage of a mistake by the #SoarSuperFalcons. #OneSoccer#CANvNGA | 1-1 | #CanWNTGold pic.twitter.com/OAmvU8aRi8

Sinclair was substituted into the game in the second half. Right off the bat, she took advantage of a defensive mistake by Onome Ebi. However, almost immediately Nigeria regained their lead. Rasheedat Ajibade’s goal (credit to Equalizer Soccer for showing the goal) somehow ended up in the back of the net. There was obviously a miscommunication between CanWNT goalkeeper, Sabrina D’Angelo, and her defence on that play.

Sinclair and Zadorsky hit the post in the 65 and 66-minute of play. Beckie was left unmarked in the 69-minute, and her cross to Julio Grosso was a good opportunity to score. Unfortunately, Grosso skied the ball over the net. D’Angelo made a big save from a Christy Ucheibe shot late in the game.

Canada did get a late equalizer in Langford. Beckie played a big part in the set-up as she cross-connected perfectly with Zadorsky. Her header allowed the team to draw even against Nigeria. Also, Sinclair almost scored in the 90-minute thanks to incredible work from Deanne Rose. However, she was unable to hit the target and as a result, the game ended in a 2-2 draw at Starlight Stadium.

The CanWNT ends the Celebration Tour with a tie against Nigeria

Sorry that should be – at least 1 friendly at home in June.

As for the game itself, it was not Canada’s strongest. The offence still needs some work and they still depend a lot on Sinclair offensively.

What is next for the CanWNT and Nigeria?

However, qualifying for the Olympics and defending their Gold medal is a different matter. The team that wins the 2022 Concacaf W Championship automatically qualifies for the 2024 Summer Olympics in Paris.

The team that finishes second and third in the Concacaf W Championship will play a Concacaf Olympic play-off. The winner of that game will go to the Summer Olympics.

There are only two spots available. The two teams besides the USWNT to be wary of are probably Costa Rica and Mexico. Mexico was able to get a win and a draw in Mexico City against Canada last year. Unfortunately, it will not get any easier as they have a professional league and all the games of this competition will take place in Monterrey, Mexico.

Also, the CanWNT had a very tight game against Costa Rica in the 2020 Summer Olympics qualifiers. It was Jordyn Huitema’s goal that gave Canada the hard-earned 1-0 win that gave Canada a ticket to Tokyo 2020.

Three Key Takeaways from the Game:

The #CanWNT tied the game late, as both teams share points at #StarlightStadium in #Langford, British Columbia.

The CanWNT did not play well defensively. It seems weird to write this. They were so dominant on the defensive end and did not give up more than one goal in each game at Tokyo 2020. However, the two goals they gave up were disappointing, especially the second goal given up.

Jessie Fleming can create chances for her teammates. The one thing everyone learned from these two games (including the game at BC Place) is Fleming’s delivery. Her ability to get her teammates involved is critical to the success of the national team.

The post Christine Sinclair scored her 189th goal in a 2-2 draw at Starlight Stadium appeared first on Last Word On Soccer.