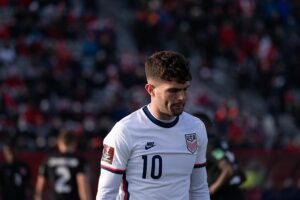 EDITORIAL – The United States Men’s National Team suffered its second loss of Concacaf World Cup Qualifying yesterday. It was a 2-0 loss against Canada in freezing conditions. The Yanks did well between the boxes but lacked ideas in the attack amid Christian Pulisic struggles. What does this mean for the match on Wednesday and what does this say big picture?

Manager Gregg Berhalter had a noteworthy quote after the game. They did many things well that Berhalter cares about. They had 64% possession, built out of the back (with mixed results), and outshot Canada 13-8. Only three of those shots were on goal however.

They got the fullbacks involved in the attack and created some set pieces. But the quality and execution were missing. For what it’s worth, they had a better first half xG despite being down 1-0. But after a defensive collapse to go down seven minutes in, they didn’t adjust well enough accordingly to the game state.

Pulisic’s passing was better than against El Salvador, but he again had a hard time creating chances. Defenders swarmed him anytime he was on the ball. He went to ground several times but only drew three fouls in 90 minutes.

Referee César Arturo Ramos Palazuelos was very Concacaf in swallowing his whistle and letting both teams get physical. The contact frustrated him further. He took multiple defenders on unsuccessfully, just like against El Salvador. His only support came from out wide or from behind.

Is Pulisic playing through an injury? Maybe he is just rusty because of his lack of playing time at Chelsea. Perhaps he was just really cold, playing back-to-back games below freezing. Whatever the reason is, the look on his face suggests he hasn’t enjoyed playing in these two games.

This isn’t all on Captain America, though. Ricardo Pepi has yet to see the field this window. David Ferreira and Gyasi Zardes are not goal dangerous at this level. Brendan Aaronson had his worst performance of CWCQ in my opinion.

Weston McKennie’s header on a corner and Paul Arriola’s late bicycle kick were the only scoring chances that caught the CanMNT by surprise. Berhalter can praise the performance all he wants. His team rarely made the opponent uncomfortable. Canada on the other hand, created nervous moments for the visitors in transition regularly.

Canada, just like El Salvador, gave Pulisic little time and space on the ball. They kept numbers back to protect a lead. It set up perfectly to force someone else to break down the defense. And no one did. Antonee Jedi Robinson scored on a broken play in Columbus for the only goal. That’s not something the USMNT can rely on.

Pulisic needs to play up to his perceived potential. The supporting cast around him need to be threatening. Berhalter has to adjust something tactically to make the team more threatening and less predictable. Anything less and Wednesday’s game against Honduras will be a tough game to win comfortably.

Picture credit to Alex Lupul of Last Word on Sports on January 30, 2022.

The post Christian Pulisic Struggles as USMNT Lack Ideas in the Final Third appeared first on Last Word On Soccer.