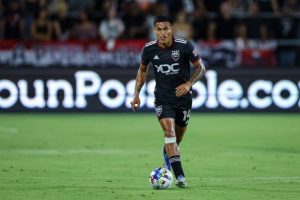 DISTRICT OF COLUMBIA – D.C. United hosted Colorado Rapids on Sunday night at Audi Field. It was a critical game for two bottom dwellers. D.C. were coming off a big win over NYCFC midweek, as the Wayne Rooney rebuild continues. Colorado had lost two in a row by a combined 10-1 score.

The home side had the better start, pinning Colorado in the box with several crosses. Christian Benteke, in his first MLS start, almost scored in the 6th minute. He separated from Keegan Rosenberry and headed the ball to the far post. The shot was just wide. He had a great chance in the final minutes of the half, but it was blocked.

Colorado grew into the half. Felipe Gutiérrez made a late run into the box in the 18th minute after Sam Nicholson won the ball. He shot first time but it was blocked. Diego Rubio had several good chances to score. He committed a foul on a corner seconds before heading the ball into the net. He was bodied off the ball later by Donovan Pines in the box. He forced a save from David Ochoa in the 43rd minute from outside the box.

Benteke was the main character of the second half. He drew a penalty in the 64th minute, going up for a header against Rosenberry. Rosenberry’s arm when straight up in the air and the ball hit it. Benteke, took the penalty low and to his left but William Yarbrough made the save. A minute later, he had a header on a corner saved off the line. Gutiérrez was in the right spot and headed it off the line.

Both teams went for it in the final 20 minutes. Ravel Morrison had a shot go just over the bar off a corner. Max Alvez nearly found an outstretched Gyasi Zardes, but he couldn’t get the shot on goal. Jonathan Lewis made a great run in the final minute of stoppage time but could not get enough on his shot to trouble David Ochoa. The match ended 0-0.

Points dropped for both team: D.C. had the fewest points in MLS going into this game. Colorado internally felt they needed 15 points from six games. Both teams can take something from the performance. If nothing else, they didn’t lose. But their playoff hopes are dwindling. Both clubs need wins.

“We fought to the end. Not the result we wanted. We needed a win. If we can bring out that mentality the rest of the season, we have a chance to win every game,” Lalas Abubakar told Last Word on Soccer postgame.

Penalty redemption: It’s been a rough week for the Rapids, penalty wise. This was the fourth PK in three games from Yarbrough. He finally made his first save of the year from the spot. Rosenberry has to be relieved to.

“Our average height was 5’11” tonight. Their strikers 6’2″ and 6’3″. It took a lot of concentration to deal with Benteke. We’ll all talk about the penalty save, which was huge. [Yarbrough’s] leadership and decisions at the back with the ball, was really good,” Rapids manager Robin Fraser said.

Wazza work in progress: Benteke’s still adjusting to MLS. Ravel Morrison was a bright spot off the bench. This is a team building towards next year. They’ve clearly got a ways to go.