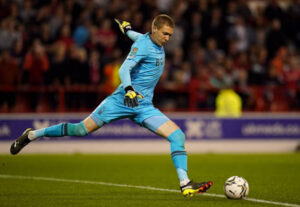 NOTTINGHAM – Ethan Horvath made the move to English Football Championship side Nottingham Forest knowing it would be a tough task to claim the No. 1 job. Horvath came out on the losing end for the first time with the second-tier club on Tuesday night, but did garner praise for his strong outing between the posts.

Horvath made his second-consecutive start in the Carabao Cup, seeing Wolverhampton Wanderers roll to a 4-0 win at the City Ground. The U.S. Men’s National Team goalkeeper was a lone bright spot for Chris Hughton’s side, making nine saves and helping his side avoid a much, more lopsided defeat to the Premier League visitors.

The 26-year-old has watched Brice Samba start all three matches in league play so far, but could’ve boosted his chances of replacing last season’s No. 1 after a solid showing midweek. Horvath isn’t guaranteed to remain in net for this weekend’s trip to Derby County, but has given Hughton something to consider in hopes of sparking his team to a first league victory of the new campaign.

“We had to rely on Ethan to pull out some good saves – he was excellent tonight, that’s exactly why we brought him in,” Hughton said post match.

“I am seeing some good competition from Ethan – from both games he has played and in training.”

Horvath waited for his chance to play after watching from the sidelines at Belgian side Club Brugge over the past two seasons, but earned himself a move to England in hopes of earning regular minutes. The Colorado native impressed this summer with the USMNT, denying Andres Guardado’s penalty kick in an eventual 3-2 Concacaf Nations League Finals win over Mexico.

He still remains a talented goalkeeper in the USMNT pool, looking to join Zack Steffen and Matt Turner in September for the start of World Cup Qualifying. Although his club situation remains unknown for the time being, especially with Nottingham Forest out of the Carabao Cup and winless in the Championship, Horvath has provided a slight glimpse of what he can offer the club in a starting role.

Nottingham Forest has lost five of its opening six matches across all competitions and will visit Pride Park on Saturday before entering a two-week break due to the FIFA international schedule.