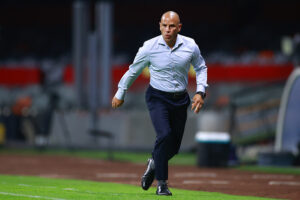 Chris Armas getting fired is not that big of a surprise. Toronto FC is currently on a six-game losing streak. This includes a 7-1 loss at Audi Field against DC United. This is the biggest MLS season loss in club history. They are also the worst team in MLS this year with five points. A big reason for that is 27 goals given up, which is the most of any team in MLS.

Today, TFC made a public announcement relieving Chris Armas of his head coaching duties. The news broke out early this afternoon. Chris Armas was not with TFC very long, being hired as head coach of the club back in January.

Chris Armas started off his Toronto FC head coaching career on a positive note. His team eliminated the then-defending Liga MX champions Club León in the Concacaf Champions League Round of 16. This despite experiencing a rash of injuries. A large part of that result was a great collective defensive performance and many players stepping for Toronto. Unfortunately, the defence has not shown up much since then. They have only won one game in MLS. This was a 2-0 win against defending MLS champions Columbus Crew SC in May 12.

Yes, TFC would have had a better record if they were able to play in Toronto. It is important to note though that CF Montréal and the Vancouver Whitecaps FC both have the same problem. Both teams are also doing better than Toronto. Yes, Vancouver only has eight points in 10 games played. But then one looks at Montreal, who currently had 16 points with 11 games played. This is more than double the number of points Toronto has currently. Furthermore, Toronto was able to deal with this problem pretty well last year, as they almost won the Supporters’ Shield.

Sources: #TFCLive have told #usmnt striker Jozy Altidore to train on his own apart from the first team after a disagreement with manager Chris Armas: https://t.co/t6D4MCmTGH

Then there is the problem with Jozy Altidore. Altidore has not played for Toronto this year right now not because of injuries. The reason is the rift that exists between Altidore and Armas. According to Neil Davidson of The Canadian Press, ESPN sources stated that the rift happened in late May, where Toronto lost 1-0 to Orlando City SC. In that game, Altidore was substituted in the 70-minute by Ayo Akinola. He has not played a game since then.

This is what current TFC General Manager Ali Curtis said about the decision:

“The results drive our business in so many ways and in this sense our results weren’t there, and we felt like we needed to head in a different direction.”#TFCLive

The news of Chris Armas departing as head coach should not surprise anybody. Under his head coaching tenure, TFC has been unable to defend and prevent goals from being scored in their net.

The new coach who comes to Toronto, must have a good track record and/or must be a defensive-minded head coach, and/or possibly be familiar with TFC players and staff. Former TFC defender and captain Steven Caldwell is one name that comes to mind. Caldwell was the captain of Toronto’s MLS team before Michael Bradley was the captain of the team.

Another candidate is Mike Muñoz. He is the current head coach of Toronto FC II. While he does not have much MLS experience, he does have some experience coaching the reserve teams of MLS clubs. He also coached the LA Galaxy II from 2017-19. Muñoz will look to unlock the team’s local talent from TFC into MLS. TFC II is currently seventh in USL League One with four wins, losses, and ties each this year.

It might have been a good idea to look for other coaches. It seems though that Toronto does not have much time to find a head coach this year. Especially, when TFC has already played 11 games this season. The biggest priority for Muñoz should be the defence. If they cannot solve that, they will not win many games this year. There could be other obvious candidates like Danny Dichio, who scored TFC’s first-ever goal at BMO Field. However, the list is speculative on who could be the next head coach of Toronto’s MLS team.

The Interim Head Coach of Toronto FC will be Javier Perez

#TFCLive assistant coach Javier Perez will take charge of the team for Wednesday.

It is a shame what happened to TFC this year. Last year, they almost won the Supporters’ Shield, and two years ago made the MLS Cup Final. Not playing in Toronto certainly hurts. The U.S.-based MLS teams do not know the difficulties the three Canadian MLS teams are currently experiencing. However, it is fair to say that the team’s level of play is much below that of last year. Last year, they were a much better defensive-minded team that can win close games. This is something that has been missing this year.