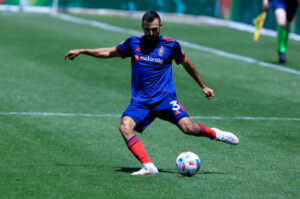 CHICAGO – The Chicago Fire are winless after the first four matches of the 2021 MLS season. Following a disappointing 2-0 loss to the previously winless Philadelphia Union, Chicago has only one point to their name out of a possible 12.

The scoreless first half was not filled with impressive soccer from either side, with both teams struggling to create chances.

The most inspired moments of the half came from Philadelphia between the 14th and 16th minutes.

In the 14th minute, Philadelphia forward Cory Burke received a cross from Olivier Mbaizo that resulted in a close-range header. Fire goalkeeper Bobby Shuttleworth made the save as the ball was directed right to him.

Chicago defender Boris Sekulić was the hero of the 15th and 16th minutes. Philadelphia midfielder Jack McGlynn took two shots on an empty net － near certain goals － but Sekulić put himself in front of both to save the day.

The rest of the half saw minimal offensive creativity, with both teams mainly engaged in a battle for possession.

The Union scored early in the second half during the 51st minute. On a give-and-go attack off a throw-in, midfielder Jamiro Monteiro received the ball from Burke on the goal line. The midfielder then quickly lobbed it back to Burke who fired a one-touch volley into the back of the net.

In the 60th minute, Philadelphia scored again when Kai Wagner got to a ball near the top of the box. With space given, he took a shot that redirected off fellow defender Jakob Glesnes in front of net, leaving Shuttleworth with little time to react.

The Fire, on the other hand, didn’t capitalize on any of the very few chances they were able to create.

In the 53rd minute, forward Robert Berić missed the net on an easy close-range shot with only the keeper to beat. Przemysław Frankowski and Gastón Giménez also missed the net on uncontested shots. Chinonso Offor missed an open goal when he got to a corner kick with his head and misdirected it late in stoppage time.

The Fire’s frustrations were apparent when a physical altercation between Sekulić and Sergio Ramos ensued during stoppage time, with both seeing yellow cards.