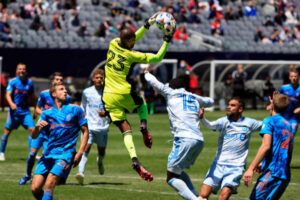 CHICAGO－ The Chicago Fire fell 1-0 in a heartbreaking loss to CF Montréal, despite mostly dominating the game throughout the 90 minutes. The loss proves that maintaining possession and creating chances means nothing if the ability to finish is neglected. Let’s take a look at the game.

Chicago had a lot to thank goalkeeper Bobby Shuttleworth for in the first half. In the fourth minute, center back Wyatt Omsberg whiffed on a ball played into Montréal forward Sunusi Ibrahim. Luckily, Shuttleworth was able to beat the forward to the ball and prevent an early concession.

In the 20th minute Shuttleworth stopped a shot from the center of the box that came from Montréal forward Bjørn Johnsen. The play came after an intercepted ball in the backfield, catching Chicago’s defense off-guard.

Former Fire midfielder Djordje Mihailović, who played his first game against his old team, showed what Chicago is missing. Mihailović’s through-balls and crosses were picture-perfect, opening up many opportunities for his team. Unfortunately for him, no one on the receiving end of his plays could turn them into much of anything.

On the offensive end for Chicago, the squad simply could not stay onside. Chicago forward Robert Berić alone wasted more opportunities than the rest of his team. This, a result of mistiming runs and lazily failing to recover after finding himself too deep, would have been more upsetting if any of those chances produced goals, but they did not…

… until the second half.

Despite dominating possession on Montréal’s defensive end for most of the second half, the Fire could not find the back of the net. Shots went wide or sent directly at Montréal goalkeeper Clément Diop.

Late in the second half, with the game scoreless, Montréal took advantage of what would be one of their only opportunities of the last 45. Zorhan Bassong played a cross into the box that found substitute Mason Toye, who headed it into the net in the 87th minute.

Despair for a Chicago side that otherwise dominated the second half.

Hopes were lifted in stoppage time when it appeared that center back Wyatt Omsberg equalized the game with a header of his own. Yet, the offside curse came back to haunt the Fire, as the play was called back on Chinonso Offor, whose offside position led to the goal. With that, the Fire saw their hopes of scratching a point out of a game they otherwise dominated, fizzle.