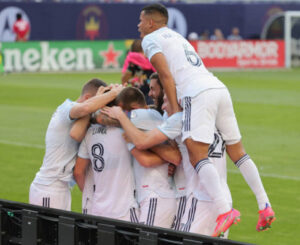 CHICAGO－The Chicago Fire finally achieved their first win in the sixth week of the 2021 MLS Season. Inter Miami CF fell 1-0 to the Fire at Soldier Field in a game that Inter will likely see as their biggest disappointment thus far this season. Here’s what happened.

The Fire saw their strongest start since the first 15 minutes of their season opener against the New England Revolution.

Easily maintaining possession for most of the half, Chicago saw more chances than any other half of soccer so far this year. Miami saw few legitimate chances themselves, focusing their efforts on defensively containing an energetic Fire side.

However, Chicago’s energy did not immediately translate into finishing ability.

Przemysław Frankowski missed an open net on an off-balance fast-break shot during the 21st minute. Even with his conceivable excuse, the close-range shot should certainly have hit the back of the net.

Álvaro Medrán simply could not hit the target on set-pieces. Corner kicks were either hit over the heads of attackers or easily dealt with by Inter Miami defenders.

Every single one was launched over the net.

Robert Berić’s finishing was particularly disheartening for a designated player. In the 40th minute, with all the time in the world to take a shot, he booted it over the crossbar.

Heading into the second half, Berić twice shot the ball directly at Miami goalkeeper John McCarthy despite enjoying a lot of space to hit the target.

In the 60th minute, Luka Stojanović came into the game to replace 17 year old Brian Gutiérrez. Though a strange swap given Gutiérrez’s excellent performance, Stojanović scored in the 69th minute off a set-piece. As the ball was knocked to the far post, it looked like McCarthy would make easy work of it. Yet, he managed to let the ball slip out of his hands and meander past the goal line, a mistake which allowed Chicago the go-ahead, and ultimately their first win.