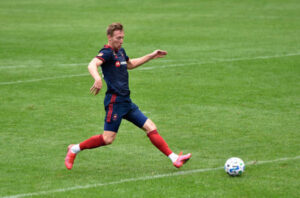 CHICAGO － In a promising start to the 2021 season, the Chicago Fire season opener ended with a 2-2 draw against the New England Revolution, the Eastern Conference’s runner-up last season.

In the 5th minute, striker Robert Berić knocked one in for the Fire. Boris Sekulić found himself wide open inside the box, receiving a lovely through-ball from Luka Stojanović. Sekulić played a square ball across the box to the equally unmarked Berić, who easily found the back of the net.

The Fire’s second goal came from Stojanović in the 11th minute. Berić went from goal-scorer to assistor when he received a cross in the box by the far post. Turning to find support, he located Stojanović running toward the goalmouth, and played the ball back to the midfielder who connected with a one-touch rocket into the back of the net.

The Revolution answered in the 14th minute after a goal from Adam Buksa. Buksa connected on a header off a corner kick.

New England’s second goal came in the 27th minute from Gustavo Bou, who converted by sliding into a cross that came from the outside.

The result was set in stone during the first half as neither team would score again.

Defensive Commitment: Perhaps the Fire suffered from an air of over-confidence following their first two goals. Their defensive effort between the 14th and 27th minutes did not reflect their effort throughout the game. The Fire showed they are not the same team as last season －a side who spent more time picking balls out of their net than converting themselves.

Offor’s Debut: Chinonso Offor made his MLS debut in the game after transferring to Chicago during the offseason. He might be just the attacking force the Fire need. Offor combined with Stojanović on a give and go that led to Chicago’s first goal. Hopefully Offor can give the Fire offense the spark it badly needs this season.

Playoff Potential: Such a strong showing from Chicago begs the question whether Chicago has what it takes to make a playoff run this season. Only time will tell. But after such a promising start, it’s fair for fans to wonder whether this is the season the Fire can get back on track as a winning squad.