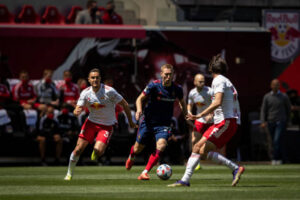 HARRISON, NJ－The Chicago Fire fell to the New York Red Bulls in a 2-0 result on Saturday. Both teams entered the game determined to accomplish their first win, but the Fire must keep searching.

Fire manager Raphaël Wicky made the his first adjustment to the starting 11 this season. Mauricio Pineda started over new arrival Chinonso Offor, taking Álvaro Medrán’s position at center mid. Medrán moved up to left mid, where Offor has started this season. This, presumably, was Wicky’s strategy to deal with the Red Bulls’ tendency to press the defense, while simultaneously getting the most out of Medrán’s potential as an attacker.

The game started frantically. Passes went all over the place, and both teams found themselves turning the ball over, unable to find any groove. They calmed down around the 20 minute mark as possession evened out.

In the 35th minute, Medrán sent a cross into the top of the box that found center back Francisco Calvo. With his back to the net, Calvo took a touch and attempted a bicycle kick on net. It would have put the Fire up by one had goalkeeper Carlos Miguel Coronel not been glued to his line.

The second half began explosively for the Red Bulls. In the 47th minute, they scored their first goal. Fábio Gomes Netto worked his way to the goal line inside the box. Laying the ball off to the top of the box, Cristian Cásseres Jr. ran in and took a hard shot that gave goalkeeper Bobby Shuttleworth no chance.

EL VENEZONALO STARTING THE SEASON WITH A BANG

Chicago struggled to recover as they utterly failed to create any opportunities that might threaten the Red Bulls. New York scored their second goal in the 64th minute. Fábio received a cross and headed it back to 17 year old Caden Clark who found the back of the net.

Before Fire fans hit the panic button, they need to keep one thing in mind. The team is plagued with injuries, and they suffered the same fate last season. Combined with the fact that the Fire squad is a young one, there is plenty of time left in the season for each player to fully come into their role and for players who suffered injuries to return and fill out the roster. If that happens, the Fire have the potential to finish mid table this season and develop young talent for post season success moving forward.