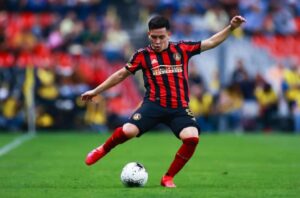 ATLANTA — As the Chicago Fire took the field Saturday against Atlanta United, they hoped to clinch their first road win since 2019. Unfortunately, it’s a hope that has yet to be fulfilled. The Fire lost 3-1 in the Atlanta United home opener.

The first half started with dogged determination from the Fire. In only the second minute, Chicago’s Chinonso Offor received a free-kick and volleyed the ball over the net in a near miss that threatened the Five Stripes early on.

That the Fire did capitalize on their early chances came back to haunt them.

Atlanta scored in the 22nd minute after a free-kick when Ezequiel Barco hit a one-touch bullet from beyond the box that hit the crossbar and landed behind the goal line.

Holy cow Barco! #ATLUTD lead over Chicago at HT thanks to this strike:

Chicago looked like they would make a comeback early in the second half. In the 46th minute, Luka Stojanović knocked in his second goal of the season off a grounded cross sent by Boris Sekulić. The ball seemed to skip right by United’s defenders, who should probably have made easy work of it.

But the Fire’s momentum was stopped short when Atlanta answered in the 66th minute. Marcelino Moreno sent a cross from outside the box that, at first glance, did not seem to be too threatening. Because of the congestion inside the box, Jake Mulraney was able to get a touch to it before goalkeeper Bobby Shuttleworth, giving Atlanta the lead.

Robert Berić, the Fire’s leading scorer in 2020, almost equalized the game in the 83rd minute when he chipped the ball over Guzan’s head. However, Guzan was able to catch up with the ball as it hit the post.

Atlanta sealed the deal in the 86th minute with a goal from Emerson Hyndman. Shuttleworth was forced to make a save off a shot from Mulraney, but the rebound ended up at the feet of a wife-open Hyndman.

The Fire turn their attention to the Red Bulls, who they take on in New York on May 1st at 12:00 PM CST.