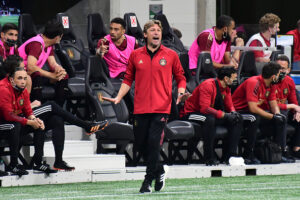 Editorial — Atlanta United’s stuttering season hit another bump after a 3-0 away defeat to Chicago Fire on Saturday evening.

Despite dominating 64 percent of possession at Soldier Field, Gabriel Heinze’s side managed just two shots on target throughout the match. After a closely fought first half-hour, the Fire opened the scoring in the 34-minute through Ignacio Aliseda. Alvaro Medran drove through the midfield before laying off to the Argentine winger, whose effort was deflected beyond Brad Guzan and by the desperately defending of Mo Adams.

+3. How we feeling this morning? pic.twitter.com/Qxy2ig708a

And it was Aliseda who doubled the Fire’s advantage deep into first-half stoppage time, firing home after Miguel Navarro had intercepted a switch of play from Anton Walkes.

After the break, Aliseda turned provider, feeding the ball to the onrushing Przemyslaw Frankowski who made no mistake with his finish to round off a swift Chicago counter-attack.

Atlanta grew into the game from there and created a flurry of half-chances as the game wore on but the damage was already done and the Five Stripes now sit 10th in the Eastern Conference, four points adrift of the playoff spots.

Gabriel Heinze sticking to his guns despite lack of edge

As was the case in recent games against NYCFC and New York Red Bulls, Atlanta’s attack never really got going here. The long-standing question of how the Five Stripes will cope when Josef Martinez is absent — currently through fitness issues after international duty — remain.

Of course, Atlanta’s cause wasn’t helped by the likes of Jurgen Damm, Santiago Sosa and Franco Ibarra joining Martinez on the absentee list, as well as DP center-back Alan Franco. But the manner of their performance was once again extremely worrying for supporters.

Speaking to reporters after the match, Heinze admitted his side need to create more chances, but insisted he’ll continue to “follow the same ideas”, trusting the process will bear fruit soon enough. 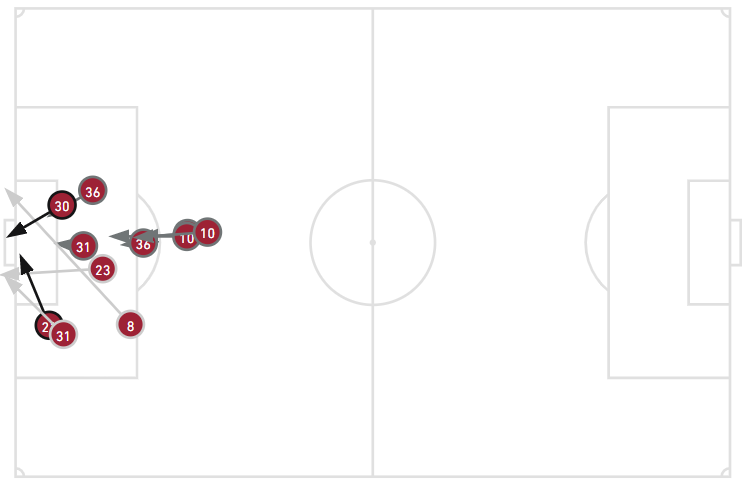 When asked if he would consider changing the team’s approach to find more goals, he responded: “No, I’m not going to change anything. I’m going to fix what we did bad. I’m going to keep insisting on what we are doing well. Always following the same ideas, the same philosophy that I have with my teams. I know about this in the games you say. But I’m not going to change and leave this path.”

Heinze added: “Let me repeat, I’m happy with the group I create. I know these players are going to play even better. From what I talked with the club president, I’m following the path that I laid out to him. I want to work with players that believe in the project. I think this team is a big group and we are going to fight for this.”

Though he wasn’t helped by some static play by Erik Lopez, it was Walkes’ failed switch of play that allowed the Fire to double their advantage right on half-time.

Walkes has enjoyed a solid individual season so far, keeping Alan Franco out of the side to partner Miles Robinson and masterminding a number of impressive defensive performances. But the Englishman took total responsibility for the mistake after the match, admitting he should have cleared the ball into the stands, rather than try to play out with only seconds to go until halftime.

“If you look back at some of the goals tonight, especially the second one, that’s on me,” said Walkes. “I’ll say it. That’s not tactics. It’s the 45-minute and I should be putting the ball on the other side of the field or in the stands.”

“It’s little things like that, game management, knowing how we play in our system. Again, 90% of the time it works, but in the 10% it doesn’t, they just get chances and score. It’s a process, but the sooner the better because results aren’t going in our favor right now.”

Walkes also defended Heinze who, despite being just 11 MLS games into his reign, is coming under fire for failing to deliver the attractive soccer he promised Atlanta fans at the start of the season.

“When we are out on the field, it’s not the gaffer playing. It’s us, 11 players. We [have] got to do our jobs,” he said. “We [have] got to sense when certain things that we can do or can’t do. These mistakes are ultimately costing us games.
“Again, sometimes it’s not the tactics like on that second goal tonight. That’s on me, I have to put my hand up, take accountability and make sure I don’t do that again. Like I said, the 10% is a small margin, but that’s what teams are exploiting right now. You need to find a way quickly to limit those errors and keep progressing.”

The center-back then called upon the players to stick together to get out of their current predicament, adding: “We want to respect ourselves, our families, the fans and the club on the field. It’s hurtful what’s happened so far. Again, we started this journey together. We are on this road together.”

The Five Stripes face a quick turnaround with a trip to Nissan Stadium to face Nashville SC coming on Thursday (8:30 pm EST). However, they’ll do so without Brad Guzan, Miles Robinson and George Bello, who are on Gold Cup duty with the United States. Also, Ezequiel Barco, who is heading to the Olympic Games with Argentina.

The post Chicago Fire 3-0 Atlanta United: Gabriel Heinze sticking to his guns despite another defeat appeared first on Last Word On Soccer.