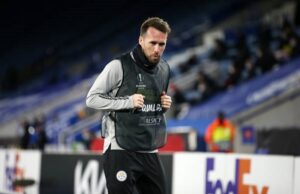 There’s been a lot to talk about these days when it comes to Charlotte FC and their roster build. The MLS expansion team have brought soccer fever to North Carolina, as 65,000 fans have already bought tickets to the home opener. Club executives project that the match will be a sell-out, breaking league attendance records. Meanwhile, the club are producing lackluster results on the pitch, dropping back-to-back preseason friendlies. The board is in a scramble as three failed transfers have left gaping holes in the squad. It hasn’t been a fairytale start for the newcomers, but could Charlotte fans still have their happy ending?

Before they had even kicked a ball, Charlotte showed us they meant business in the transfer market. First off, the club agreed a deal to sign Leicester City fullback Christian Fuchs. The Austrian was part of the famed 2015-16 squad that won the Premier League and had recently helped the Foxes to a first FA Cup title. His arrival spoke volumes about Charlotte’s ambitions in the league.

Shortly afterwards, they hired a brilliant tactician to lead the coaching staff. Miguel Angel Ramirez, fresh off a two-year spell at Brazilian giants Internacional, was snagged by the board last summer.

In December of last year, Charlotte sealed a one-year loan with an option to buy for Atletico Mineiro midfielder Alan Franco. Franco had been instrumental in Mineiro’s success in 2020, when they finished third in the Brazilian Serie A. After falling down the pecking order in 2021, Franco was seen as the perfect fit for Charlotte.

January was another successful month. First, Charlotte utilized its No. 1 pick in the MLS SuperDraft to bring in Ben Bender from the University of Maryland. A top American prospect, Bender had been a star for the Terrapins, and was eagerly picked up by Charlotte.

Most recently, Karol Swiderski arrived in the Queen City. He made history by becoming Charlotte FC’s first-ever Designated Player. The Polish striker joined after a successful and prolific spell with Greek giants PAOK.

Despite a promising start, Charlotte still had a lot of work to do in terms of squad building. The club set their sights on DC United midfielder Paul Arriola. Just as the transfer was nearing completion, FC Dallas hijacked it and bought Arriola for a record-breaking $2 million in allocation money and other assets, per MLSSoccer.com.

There was no hijacking involved in CLT’s second of three failed transfers. A deal was in place for Derby County winger Kamil Jozwiak before he suffered a long-term injury and Charlotte withdrew their interest. Jozwiak would have brought much-needed depth to the squad in terms of attacking options, but it wasn’t meant to be.

Despite the club making some impressive moves, fans were getting restless with the lack of star power in the team. Since Fuchs had arrived in North Carolina, there had been no real big-name signings. That was all set to change when an eye-watering $6 million offer for Venezuelan winger Darwin Machis was accepted by La Liga side Granada. Personal terms weren’t a problem, and it seemed like something was finally going Charlotte’s way.

Then, in a flash, the deal collapsed. At the last second, the Charlotte FC board was made aware of an ongoing legal process involving Machis. The 29-year-old was being investigated by Spanish authorities for his alleged involvement in a bar fight, meaning he couldn’t leave the country to sign for Charlotte.

It’s been a streak of bad luck for America’s newest team. There’s no other way to put it. The board have discovered several top talents, but circumstances outside their control have pried them away. Attacking depth is still lacking, and it’s prompted coach Ramirez to declare the team “screwed.” Fans can only hope the club turns things around soon.

All soccer fans know that jumping to conclusions based on preseason matches is a bad idea. And yet, it’s hard not to worry about Charlotte’s fate in MLS given their friendly results.

After a 3-0 defeat of international minnows Grenada, Charlotte have recorded back-to-back losses. First, they fell 3-1 to fellow MLS side Nashville SC. Then, just last Saturday, they experienced an embarrassing 1-0 loss to Charleston Battery of the USL Championship.

The Charleston defeat, in particular, sets a dangerous precedent for the forthcoming season. Will Charlotte be able to defeat teams they’re favored over? Coming in as the better side on paper can be a curse.

These poor results can be attributed to a lack of chemistry between players. They can also be explained by the lack of players. Charlotte just doesn’t have a reliable and consistent player on the attacking side of the pitch.

The MLS season kicks off on February 26th. This gives Charlotte just 11 days to figure things out. Since the Machis transfer fell through five days ago, the board have been quiet, and understandably so. The good news is that the MLS transfer window doesn’t close until May 4th. The bad news is that Charlotte have ten games to play before then. In order to maintain decent results in this early slate, the club need to make some emergency signings.

A lot of responsibility falls on sporting director Zoran Krneta. The Serbian agent-turned-executive has shown how capable he is of luring top European players to North Carolina. Now he needs to find a way to bring in a solid crop of players for a well-rounded roster. No more blockbuster transfers and dramatic announcements. It’s time for action.

In the meantime, CLT will have two more opportunities to get things going results-wise. They play two fellow MLS teams in the Carolina Challenge Cup to round out the preseason. These matches will be an excellent opportunity for Ramirez to try and make the best out of what he has at his disposal right now. If he can figure out a way to do that, Charlotte FC might just surprise us this season.