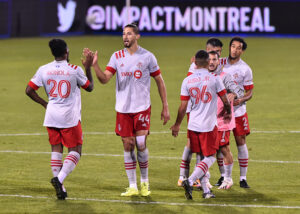 CF Montréal vs Toronto FC is one of the many games played on the MLS season-opening weekend. This game will take place three days after TFC’s Concacaf Champions League game against Club León. The game will take place at Inter Miami CF Stadium in Fort Lauderdale and will count as a Montreal home game.

Last year, the Montreal Impact (now Club de Foot Montréal) made the MLS Cup Playoffs for the first time since 2016. However, they would lose to the New England Revolution in the MLS play-in playoff game. There were also eliminated by Honduras-based side Olimpia in the 2020 Concacaf Champions League. Since then, they have lost Thierry Henry as head coach due to personal reasons.  However, they now have Wilfried Nancy as head coach. From 2016 to early March of this year, Nancy was the assistant coach of the Impact.

Montreal had two preseason games before their BMO Derby match against Toronto. In those two games, they lost 0-2 against Tormenta on April 8 and won 5-1 against the Tampa Bay Rowdies on April 10. Nancy was pleased with the progress Montreal made with their previous game against the Rowdies:

“Yesterday we were good defensively, had the desire to move forward & press the opponent. Good spirit in difficult conditions. With the ball, we were cohesive. Yesterday I told the guys I was happy with what I’ve seen so far.”

Romell Quioto might be Montreal’s best player. In the 2020 MLS season, he led the team in goals and was tied in the team lead with six assists. The other player to look out for is Saphir Taider, who co-led the team in assists and scored four goals for the Impact. Luis Binks is the other player to watch out for, he won the defensive player of the year award for the Impact. Lastly, the growth of James Pantemis will be interesting to watch from a Canadian perspective. He was one of Canada U23’s best players in the Summer Olympics qualifying tournament.

Toronto FC has momentum on their side by eliminating defending Liga MX champions, Club León on aggregate 3-2 in the 2021 Concacaf Champions League. It was a remarkable achievement, and it was done without the services of players like Jonathan Osorio, Jozy Altidore, and Alejandro Pozuelo. It also just shows how much the local players in the Greater Toronto Area have developed since TFC started their first MLS season back in 2007.

There were five Canadians that started in the second leg against León according to The Canadian Press. Two of those players were credited with assists against León on April 14. This is how Chris Armas, current head coach of Toronto, described the mood after eliminating the defending Liga MX champions.

“If you were inside the locker room you’d see all the veteran players — (Alejandro) Pozuelo, Jozy (Altidore) rallying around the young guys that stepped up in a big way tonight,” he added.

TFC will look to continue this momentum against their BMO Derby rivals. Furthermore, TFC has played two preliminary games in March. They won both games against Inter Miami CF (USL Team/reserves) and the defending MLS Cup Champions Columbus Crew SC.

Pozuelo and Ayo Akinola both tied for the most goals last year with nine each. Pozuelo also led the league last year in assists and as a result, won the 2020 Landon Donovan MLS Most Valuable Player.  They had the second-best record in MLS last year but were eliminated early in the MLS Cup Playoffs by Nashville SC.

Since it is the start of the season some MLS teams would not have many injuries. This is the case for Montreal as they have no injuries to report in this game. However, for Toronto, there might be some injury concerns. One player that will definitely not be playing will be Ifunanyachi Achara, who is expected to return in late April. Other players’ status is unknown including Jozy Altidore and Erickson Gallardo, who got injured in leg one against Club León.

Both teams will start their season against each other and both teams right now will have a base in Florida. And just like last year, these two teams in addition to the Vancouver Whitecaps FC will be most impacted by the ongoing COVID-19 pandemic.

As of right now, the three Canadian MLS teams cannot play in Canada. This will put them at a huge disadvantage compared to the rest of the league just like it did in 2020. That fact may change when Canada gets more vaccines in people’s arms. By the end of June, Canada hopes to have most adults vaccinated with at least one shot at the end of June according to Michael Ranger of CityNews.

The Toronto-Montreal rivalry is one of if not the best rivalry in all of MLS. Until the 1970s, Montréal was the biggest city by population in Canada according to Population Stat. There is also a lot of history between the two cities. In particularly, the NHL rivalry between the Montreal Canadiens and the Toronto Maple Leafs. This should be a good game to watch as both rivals will go at it on April 17 at Inter Miami CF Stadium. Toronto and Montréal faced each other three times last year. Toronto won that season series with two wins and a loss against Montréal.

The game will be taking place at Inter Miami CF Stadium in Fort Lauderdale, Florida. In Canada, the game will be televised in English on TSN1, TSN4, and CTV. For those who want to watch the French-language broadcast in Canada, it will be available on TVA Sports. The game will take place on April 17 at 2:00 ET.