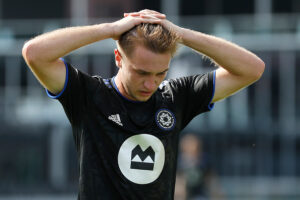 FT. LAUDERDALE, FL – CF Montréal ties with Columbus Crew SC this afternoon. Montreal was the better team but was unable to convert their chances against the defending MLS Cup champions. Columbus also played some good defence and as a result, ended in a tie game.

Full Game Summary:#CFMTL was the better team with 20 shots and 55.4 percent of the possession but only had three shots on goal. #Crew96 did not get a shot on target.

Columbus’s defence was sharp today against Montreal. Twelve of Montreal’s 20 shots were blocked by the Crew. For example, a good interception by Columbus in the opening minutes to prevent Montreal from getting a good scoring chance. Waylon Francis also made some defensive possessions. Then in the 7-minute, a good tackle by Vito Wormgoor prevented Montreal player Romell Quioto from getting a good scoring chance. Montreal had another shot blocked on 8 minutes. Quioto’s shot was blocked in the 19-minute. Amar Sejdic’s shot from outside the box in the 37th minute was also blocked.

The more important block though probably came from an Eric Hurtado shot from a dangerous position, which was deflected by a Columbus player in the 44th minute. Hurtado would get another chance in the 58th minute, but that shot too was blocked. There would later be more good defensive play by the Columbus Crew SC. Most notably, in the 81st minute when Wayne Francis intercepted a Montreal pass from the centre of the box. It was exceptional defending as he was running back to his goal and could have put the ball into the back of his own net. Furthermore, if the pass was not intercepted, Montreal might have won this game 1-0 in Florida.

CF Montréal unable to capitalize on its opportunities

As good as Columbus’s defence was Montreal did not take advantage of their opportunities. Montreal still had 55.4 percent of the possession. There were also still eight shots Montreal had when discounting all the blocked shots.

A half hour in, Mustafa Kizza’s shot from a difficult angle was saved by Columbus goalkeeper Room. That was one of the only times Montreal got behind the Columbus line in the first half. Lastly, Victor Wanyama’s header in first half stoppage time was off-target.

Montreal would have even better chances in the second half. Kizza had a terrific cross-pass and Rudy Camacho was there in the centre of the goal. He had a terrific chance to score, but his header in the centre of the goal was too high and off-target in the 52nd minute. Later on in the half, Lassi Lappalainen shot from a dangerous angle was too straight and was saved by the Columbus goalkeeper. Quioto would register Montreal’s last shot of the game in the 82-minute thanks to a good cross-pass by Ahmed Hamdi. However, the header was off-target.

Columbus Crew SC did not generate any offence

Columbus was quite fortunate to get the tie against Montreal. This is even with all their blocked shots against Montreal. The reason for that is their lack of offence. They did not generate a shot in the first half. They did, however, generate more scoring opportunities in the second half.

85′ Bradley Wright-Phillips looked like he scored for #Crew96, but he was called offside. The game remains tied.#MTLvCLB | 0-0 | #MLS

This was the best opportunity of the game for Columbus. It looked like in the final minutes Bradley Wright-Phillips finally broke the deadlock against Montreal by shooting the ball past Montreal goalkeeper Clément Diop and then putting it back into the net. Unfortunately, Wright-Phillips did not time his run when receiving Alexandru Irinel Matan’s through ball pass.

The only other two chances they had were in the 70th and 74th minute of play. Lucas Zelarayán’s free-kick was too high. Just four minutes later, Luis Díaz’s shot from the left side of the box also missed.

CF Montréal ties with Columbus Crew SC at DRV PNK Stadium in Miami, Florida. Montreal had many chances to win the game but was unable to convert. Columbus had no shots on target but was able to keep Montreal scoreless with their terrific defence.

There are two positives though if one is a CF Montréal fan. One is that this is their first clean sheet since September 1, 2020, where they beat Toronto FC 0-1 at BMO Field in Toronto. The second reason as stated by the TSN broadcasters was that this was the first time Montreal was unbeaten in the first three games of MLS since 2013 when they were known as the Montreal Impact. They won their first game this season 4-2 against BMO Derby rivals Toronto and then had a 2-2 draw against Nashville SC.

In 2013, Montreal won their first four games in the 2013 MLS season. There are things to improve, but it is certainly positive from a Montreal perspective. They will now play against Canadian rivals Vancouver Whitecaps FC on May 8 at 3:00 p.m. ET in Sandy, Utah before facing Inter Miami CF on May 12 at 7:30 p.m. ET. The game on May 8 will be televised in Canada on CTV, TSN1, and TSN4.

For Columbus Crew SC, their next game will be against Liga MX side C.F. Monterrey in the Concacaf Champions League quarter-finals at 8:00 p.m. ET in Mexico. The aggregate is currently tied at 2-2. They will then play against D.C. United at 1:30 p.m. ET on May 8 before facing Toronto FC at 7:00 p.m. ET on May 12.