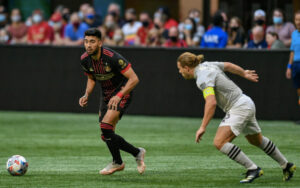 CF Montreal faced off against Atlanta United on Saturday night at Mercedes Benz Stadium in front of one of the biggest crowds since the beginning of the COVID-19 pandemic with an expected attendance capacity of 40,000. Montreal was looking to extend their winning streak to two after an impressive 2-0 road win over Inter Miami.

Clement Diop was back in net after the impressive performance and clean sheet by James Panetmis in the previous game and was put into action early as in the 5th minute when Josef Martinez got a header on goal. However, Diop made an amazing diving save.

Atlanta was doing a good job at shutting down the Montreal offense and despite all the chances they were getting they were lacking the finish and getting shots on net. The game was becoming a physical battle and we saw a lot of challenges, tackles and yellow cards from the ref.

Montreal finally got its first shot on target in the 32nd minute when off a free kick Bjorn Johnsen got a header but the Atlanta goalkeeper Brad Guzman was there to make the save. Two minutes of extra time was added on to the first half but both teams went into the locker room with no goals scored.

It took @ATLUTD 94 minutes, but a goal is a goal! Marcelino Moreno with the strike! #ATLvMTL | 1-0 | #MLS pic.twitter.com/G9AVgYHnxR

The second half started and six minutes in Atlanta thought they were on the board when Martinez had Diop beat but the offside flag went up as both teams were still looking for the opening goal. A couple of minutes later Romell Quioto found himself one on one with Guzman but the keeper once again made a big save.

In the 62nd minute, Johnsen had another scoring opportunity but his header once again sailed just wide and it seems like we were headed for a draw. Ahmed Hamdi who had come in as a sub thought he had Guzman beat in the 75th minute but again was denied by the keeper.

Five minutes later Erik Hurtado who had also subbed in found himself alone against Guzman but his attempt to lob the ball over his head failed and the offside flag went up. Four minutes of extra time was added to the game and Hurtado had one more chance to score but Guzan made another incredible save.

On the ensuing play, Atlanta scored the game-winning goal on the final play of the game when Marcelino Moreno’s header finally beat Diop to seal the win. The confirmed attendance was 40,100 in the first sporting event to have a full capacity crowd since the beginning of the pandemic.