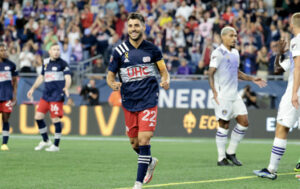 CF Montreal suffer slow start as they went on to lose to the New England Revolution 4-1. The Supporter’s Shield leaders continued their tear against the rest of the league

Montreal got off to a great start in the first couple minutes of the game applying pressure on the Revolution defense finding little openings but couldn’t get a shot on target for the first nine minutes of the game. Romell Quioto was the lone striker tonight and though he had one when he was alone on Matt Turner who was New England’s goalkeeper tonight but his shot just missed the net.

New England scored the first goal of the game a minute later when Dejuan Jones got a great shot off that fooled Montreal keeper James Pantemis for the early 1-0 lead. The Revolution doubled their lead seven minutes later when Adam Buksa got a great lob feed from Gustavo Bou and headed it into the back of the net.

New England kept coming and it went from bad to worse for Montreal as Rudy Camacho accidentally deflected a pass from Gustavo Bou into his own net to make it 3-0 for the visitors. A minute later Joaqui Torres responded for Montreal as took a great shot from the top of the box that beat Turner to make it 3-1.

In the 40th minute off a corner, Quioto had another chance at goal but his header went straight into Turner’s hands and that was the last real chance we saw in the first half and the teams headed into the locker room with the Revolution up by two.

Montreal started the second half motivated to get back into the game after suffering from that slow start in the first half and trailing early. They got their first shot on target of the half at the 54th minute but it was an easy save for Turner to make. Nancy made his first change a minute later taking out Zorhan Bassong for Zachary Brault Guilard.

Romell Quioto got another shot on goal at the 61st minute but again was denied by the Revolution goalkeeper and it seemed like Montreal’s slow start was going to cost them. Montreal continued to pressure looking to edge closer to scoring a goal but the stingy New England defense was not letting them into the box.

Bjorn Johnsen came into the game at the 68th minute for a tired-looking Samuel Piette looking to add to the Montreal offense. Seven minutes later Ballou Tabla came in for Mathieu Choniere looking to add a spark to the offense who were struggling to finish plays and put the ball into the back of the net.

Torres got a great shot off in the 81st minute but again Turner was there to make the save and keep his team two-goal lead alive. New England added a fourth goal in the 86th minute as Bou got on the scoresheet with a great shot that beat Pantemis to make it 4-1.

The ref went to VAR to verify if the goal was offside and upon further review but the goal was confirmed and Montreal’s deficit was now by three. Djordje Mihailovic thought he had one when he got a big shot on target but it rang off the post and stayed out. Three minutes were added at the end of the second half and Montreal did everything it could but it was enough as the final whistle blew and Montreal suffered a second consecutive loss.

After the match in his press match post-conference, Nancy was pleased with the response of his group despite the loss.

” I really liked the way we came out in the second half, we put ourselves in a bad position in the first and it didn’t make things easy for us and now we focus our attention on our next game on Saturday against Atlanta”.

Samuel Piette spoke about the difficulty of being down three goals inside 30 minutes.

” It was honestly a shock that I didn’t see coming but I honestly liked our chances in the second half and I felt like we dominated most of that second half”.

CF Montreal will be back at it on Saturday at Saputo Stadium as they will face Atlanta United looking to get back in the playoff race as with the loss tonight they are now in 8th place but only by one point.