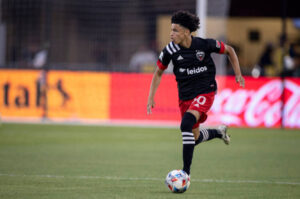 WASHINGTON, D.C. – CF Montreal made the trip to Washington, D.C. looking to get back in the playoff race after dropping to 8th place in the MLS Eastern Conference standings. A couple of weeks ago they were comfortably in third but after losing two straight and getting a draw against Atlanta, Montreal was one win away from getting back into it.

There were some major lineup changes with Victor Wanyama, Rudy Camacho, and Kiki Struna suspended due to the fact both Camacho and Wanyama were shown red cards. Struna was out due to a yellow card accumulation and to make matters worse James Pantemis was out due to Covid protocols and head coach Wilfred Nancy opting to put in a first-timer Sebastien Breza over Clement Diop.

Five minutes into the game, it was the home side with the better start testing Breza early in his first-ever MLS game, but the Montreal keeper looked calm and composed and made some good saves. A minute later he was put into action once again as he made a one-on-one save on Kevin Parades.

Montreal’s lack of offense was showing as Nancy had left their leading scorers Mason Toye and Djorde Mihailovic on the bench and again in the 9th minute Breza made a great save again on Parades. Breza was doing an amazing job shutting the door and keeping his team in the game.

Montreal took the momentum and on the ensuing play Zachary Brault Guillard got the ball and tried to cross the ball and it ended up in the back of the net and over the D.C. keeper Jon Kempin who got the start tonight because Bill Hamid was out due to injury to make it 1-0.

In the 37th minute, it was Ibrahim Sniusi’s turn to test Kempin with a great shot on target but once again the D.C. keeper made another save. Two minutes later D.C. would tie it off a set piece and with a great header from Andy Najar to make it 1-1.

Snusi found himself on a breakaway in the 43rd minute and even outdeked the keeper and had a wide-open net and missed as his shot went wide.

The first half finished with teams tied at 1-1 and both teams headed to the locker room with 45 minutes left to decide a winner.

The second half started with Nancy subbing in Mihailovic for Sninusi as it seems Sninusi got injured during the first half. Breza made another save in the 48th minute on Junior Moreno keeping the score tied and Montreal in the game and D.C. United kept coming looking for the lead.

They got it in the 53rd minute when Ole Kamara found himself alone in front of Breza and beat him with a great shot to make it 2-1 for the home side. D.C. kept the momentum and was looking for more and Breza was forced to make another big save one minute after scoring the second goal.

In the 55th minute, Nancy made two more changes bringing in Clement Bahiya and Mason Toye who is their leading scorer with seven goals. Montreal kept pushing looking for the equalizer but failed to convert and with 13 minutes left in the game was still trailing 2-1.

Four minutes were added on to the 90 and Montreal had one last push to try and tie the game but it wasn’t enough as they would suffer another loss and will now head home to face the New York Red Bulls on Saturday, August 14th at Saputo Stadium.

A curling strike to give @DCUnited the lead!