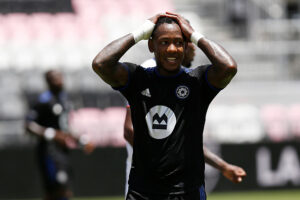 FC Cincinnati stunned CF Montréal with two goals in the second half. Montreal faced Cincinnati at their home away from home in Ft. Lauderdale at the stadium of Inter Miami against a team looking for its first win of the season. In the first 20 minutes of the game, both teams were pushing hard to try and get the first goal but couldn’t finish.

At the 24-minute, Erik Hurtado managed to get the first shot on target for either team. The shot was saved though by the Cincinnati goalkeeper Kenneth Vermeer and five minutes later it was Djordje Mihailoivic who had another great chance of a free-kick but again was denied by Vermeer.

Eight minutes later it was Victor Wanyama with a header on goal right on target but right into the hands of the keeper and the game stayed 0-0. In the 43-minute, it was Clément Diop to be thrust into action as he made a great save on Luciano Acosta.

45′ #CFMTL player Romell Quioto had a golden chance to score and should have scored, but his shot from very close range was off target. #MTLvCIN | 0-0 | #MLS

Two minutes later, Romell Quioto found himself on a 2 on 0, but as soon as he got the pass he failed to put it into the back of the net. The first half finished in a scoreless draw between Montreal and Cincinnati. Montreal head coach Wilfried Nancy made one change at the start of the second half bringing in Zorhan Bassong for Lassi Lappalainen.

56′ #CFMTL scores! Romell Quioto makes a terrific pass to Djordje Mihailovic, to give his team the one-goal lead. #MTLvCIN | 1-0 | #MLSpic.twitter.com/sa2IC9JcLu

At the 53-minute Wanyama had another chance with the header but once again was denied by Vermeer. However, only three minutes later, Djordje Mihalovic would break the ice when he got a great pass from Quioto and finally managed to put the ball into the back of the net. This gave Montreal the 1-0 lead.

It would take until the 70-minute for Cincinnati to respond. Jürgen Locadia would head in a ball past Diop to tie the game at one with 20 minutes to go in the game to decide a winner. With four minutes left in the game, the visitors were able to break the deadlock. Cincinnati player Gustavo Vallecilla found the back of the net to complete the upset.

That is the second week in a row that Montreal has lost a game late (Montreal lost to Atlanta United FC last week) and will look to end its two-game losing streak when they face the Chicago Fire FC next Saturday at 1:00 p.m. ET. The game will take place at Soldier Field in Chicago, Illinois.