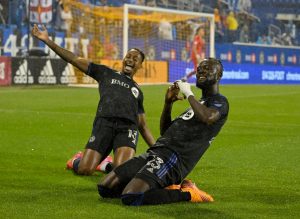 Full Game Summary:#CFMTL Kei Kamara had an excellent first half.

CF Montréal was the better team as they had some good scoring opportunities.#cf97 did not generate enough scoring chances today at #SaputoStadium.#MTLvCHI | 3-2 | #MLS

Kei Kamara had an excellent game

Kei Kamara was the player of the game. He was the only player to be involved in all three Montreal goals, which all happened in the first half.

44’ #CFMTL scores again! Kei Kamara steals the ball and delivers a terrific pass to Zachary Brault-Guillard, who was able to put the ball into the back of the net! #CFMontréal#MTLvCHI | 3-1 | #MLSpic.twitter.com/Abg1ufB3E8

What might have been most impressive though was Kamara’s assist. The play started with Kamara stealing the ball and running down the field. He then found Zachary Brault-Guillard, who accurately shot the ball into the bottom corner of the net. Brault-Guillard’s goal would end up being the game-winner as Chicago got a goal back in the second half.

CF Montréal was the better team

CF Montréal had the better scoring opportunities. There were some clear scoring opportunities that could have resulted in goals. To be fair, a lot of these chances did not register on the stat sheet. Most of them were great passes or crosses that were not finished off properly by the player trying to score the goal.

These were just two examples of Montreal trying to generate offence. Montreal had more shots and shots on goal than Chicago. Furthermore, Montreal converted on three of their five shots on goal. Also, with maybe the beginning of the second half, Montreal controlled the pace of play. It did not feel Chicago had many chances in open play but was able to score two goals via penalties.

Chicago Fire FC did not generate much offence

Besides the two penalties converted by Xherdan Shaqiri, Chicago did not generate many scoring opportunities. It did not feel that Chicago had much momentum in the game. These were the only notable plays made by Chicago in the game:

57’ #cf97‘s Xherdan Shaqiri converts his second penalty of the game as Chicago is now back in this game! #ChicagoFireFC#MTLvCHI | 3-2 | #MLSpic.twitter.com/Z0Qe5bqY9p

The Durán shot was probably Chicago’s best chance besides the two goals they scored. The two penalties converted by Xherdan Shaqiri were the reason why Chicago was in the game until the very last second, even though the second penalty given was very questionable, and probably did not deserve a penalty shot. The second goal by Shaqiri was more impressive than the first goal, but it still did not make a difference to the game itself.

What this game means for both teams

For the Chicago Fire FC, making the MLS Cup Playoffs is now going to be very difficult. They are six points behind Columbus Crew SC as Chicago has three games remaining. Unfortunately, for Chicago, even winning the three remaining games may not be enough to make the MLS Cup Playoffs.

They would need to jump not just past Columbus, but also the four teams ahead. More importantly, with the exception of the New England Revolution, all the other teams ahead of Chicago have played one less game including Columbus. They are in a very similar position to Toronto FC, after they lost to Atlanta United FC yesterday.

The last time Chicago made the MLS Cup Playoffs was in 2017. It looks like that streak will unfortunately continue for a franchise that won the MLS Cup in their expansion season back in 1998.

Meanwhile, for CF Montréal, they clinched an MLS Cup Playoffs date for the first time since the 2016 MLS Cup Playoffs.  Montreal made the MLS Cup Playoffs in 2020 but lost in the play-in game to the New England Revolution. They are now unbeaten in their last three games, including a draw against the Columbus Crew SC and a win against Canadian Classique rivals, Toronto FC.

CF Montréal will now travel to Gillette Stadium to face the New England Revolution. That game will kick off at 7:38 p.m. ET on Saturday. That game will be shown live on TVA Sports, TV38, and MyRITV & CoziTV.

This is while the Chicago Fire FC hosts expansion-side Charlotte FC at 8:08 p.m. ET at Soldier Field. This game will take place in Chicago, Illinois and it will be shown live on MLS LIVE on DAZN, WGN-TV, WAXN, and Telemundo.

For Montreal, the rest of these games are going to be used as a measuring stick for what they can do in the MLS Cup Playoffs. For all that Montreal has accomplished this year, they are inexperienced with the MLS Cup Playoffs. Getting positive results now should be the most important thing for the Canadian side.