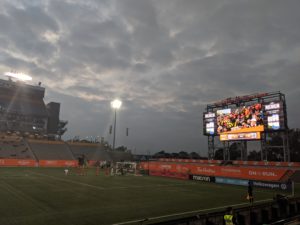 CF Montreal booked their spot in the Canadian Championship Final after beating Forge FC in penalties to advance.

A tight first half :

Ahmed Hamdi had a wonderful chance a couple of minutes later but again Henry made the save and off the rebound Ibrahim Sunusi had a wide-open net but totally missed and sent the ball over the net. In the 37th minute, Babouli again had a great chance in front but Breza made another big save.

The first half finished with no goals and both teams headed into the locker room 45 minutes away from a spot in a finals.

Montreal can’t find the back of the net :

The first real scoring opportunity of the second half belonged to Forge FC in the 56th minute when Emery Welshman got a shot on target but again Breza was there to shut the door. Lassi Lappalainen had a great chance to put Montreal in front but his shot would go right into Henry as he made the save.

The final whistle blew after three minutes off added time and the match went straight to penalty kicks. Babouli was up first for Forge FC and he shot the ball high and out to give Montreal an early advantage. Lappalainen was up first for Montreal and he made no mistake putting the ball into the back of the net for the 1-0 lead.

Daniel Krutzen was next for Forge FC and he would finally be able to get a shot past Breza to tie it up at 1-1, Bjorn Johnsen was next for Montreal and he hit the crossbar to lose Montreal advantage. Forge sent out Kwame Awuah but Breza made another stellar save.

Henry matched Breza save for save this time on Ballou Tabla, next out came Oumar Elimane Cisse and he was able to put the ball into the back of the net to make it 2-1 but the lead didn’t last long as Rudy Camacho stepped up to the line for Montreal and beat Henry with a shot that went off the crossbar and in.

Kyle Bekker who is Forge FC team captain got the home crowd pumped when he gave his team the lead beating Breza with a low shot. Rida Zouhir needed to score for Montreal to keep the game going and he did just that getting the ball past Henry to tie the game up again.

Breza came up huge again with the game tied at three he made a big save on Omar Browne but again Henry made a shocking save on Samuel Piette to keep the game level at three. David Choniere who is Mathieu Choniere’s brother came up to the spot and managed to beat Breza for the 4-3 lead.

Aljaz Struna needed to score to keep Montreal alive again and was able to beat Henry with a high shot to once again tie the game at four. Josh Navarro broke the tie for Forge FC on the following kick and again the game kept going back and forth and Zorhan Bassong replied on the following kick.

Dominique Samuel had no issues beating Breza to once again give his team the lead but it was short-lived as Clement Bahiya came up to the spot and beat Henry high again to keep the game level and his team alive. Alexander Jonsson the midfielder from Sweden gave Forge FC the lead once again and Montreal was under pressure once again.

Joel Waterman extended the shootout by beating Henry once again and then it was up to the goalkeepers as Henry stepped up the line and Breza made the save and now it was his turn to shoot and he made no mistake beating his counterpart to send Montreal to the final 8-7 on penalty kicks.

Montreal will now either face its arch-rival TFC or Pacific FC in the final and the winner qualifies for the Concacaf Champions League in 2022.

In his post-match press conference head coach Wilfred Nancy was happy for his team to advance but still thinks his team has a lot to improve on.

“The opponent played well tonight. We didn’t manage to find the necessary resources to do better tonight. I would still like to congratulate the players because it wasn’t an easy match to play considering the rotations I made to the team. But I am very pleased for the guys that played tonight because we’re advancing to the final.”

Montreal is back in action on Saturday as they head on the road for the final time this season with a trip to the big apple to face the New York Redbulls.