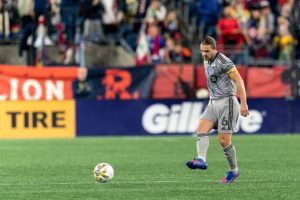 The 27-year-old who is most likely on his way to Qatar to represent Canada at the 2022 World Cup was thrilled to get the deal done.

“I am very happy to continue my career at home here in Montreal,” said Samuel Piette. “It is an honour and a great pride to wear the CF Montréal jersey and represent my city on and off the field. I want to continue to inspire young people across Quebec.”

Sporting director Olivier Renard who exceeded standards this season when his team broke almost every single team record was also happy to keep his star Quebecer where he belongs.

“We are very pleased to sign Samuel, a local Quebec, and Canadian player, to this extension,” “Already an important part of our Club for over five years, Samuel will help us continue moving our project forward in the years to come. He will continue to play a key role both at the Club and with the national team, as well as pursue his ongoing work off the field.”

Piette has spent the last six seasons in Montreal and has played a total so far of 11, 323 minutes in 143 games in the MLS and has started in 127 of those games. He scored two goals and had 10 assists this past season and played 26 games and has a solid 90% passing percentage.

In the game against the Houston Dynamo on August 13th,  he played his 150th game which is a career milestone and the Repentigny native has so far played for teams in France, Spain, and Germany before coming home to play for CF Montreal.

He played for FC Metz, CD Izarra, Deportivo La Coruna, and Fortuna Dusseldorf in the lower divisions of the league and started playing youth soccer for FC Boisbriand and Club De Soccer Repentigny.

In international action, Piette has played 64 caps with the Canadian national men’s team and has been a consistent presence in the midfield. He played 14 games in Canada’s run to qualify for the 2022 World Cup for the first time since 1986.