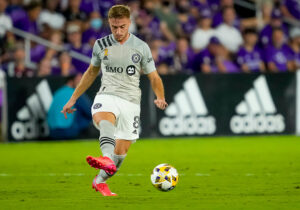 Despite getting heavily outshot by Orlando, Montreal was able to get a point on the road against the Lions.

Rudy Camacho might have been the player of the match for Montreal. He scored the game-tying in the 51-minute of a set piece from a terrific Djordje Mihailovic cross following a corner. Then in the 76-minute, James Pantemis made a great stop on a Daryl Dike shot. However, there was a rebound that Ruan Gregório Teixeira tried take advantage of. However, Camacho had other ideas and made a terrific block that preserved Montreal’s point over Orlando. Montreal will now head to Toronto recently extending the option on the loan for Joaquin Torres.

Wilfried Nancy was pleased with the team’s performance and said this according to La Presse:

“Rudy has played some very good games, he’s very good this year,” said Nancy. “He brings us his serenity with the ball. I ask him things that are not easy.”

He also said that Camacho is a leader for the Montreal team, who is looking to make their second-straight MLS post-season appearance. Romell Quioto leads the team with eight goals, while Mason Toye is second with seven goals. With assists, Djordje Mihailovic leads with 13 assists, while Torres and Quioto are tied with five assists each.

Toronto is in the midst of a two-game losing streak. After getting a win against the Chicago Fire FC just before the international break, TFC has not played well. They lost 2-0 at home against Atlanta United FC and then gave up another three goals on the road in a 3-0 loss against Inter Miami CF.

TFC’s last game against Miami did not go as well as planned. They played well in the first half but continue to give up goals because of miscues. The one above by TFC goalkeeper Alex Bono was just one example. Also in that game, Eriq Zavaleta gave up an own goal and the other goal the player was unmarked following a cross, and he ended up putting the ball into the back of the net.

TFC head coach Javier Perez re-iterated the mistakes when talking about the 3-0 loss against Atlanta according to Toronto FC.

“Pretty even game, with a mistake or two mistakes, and two corners, that’s it.”

TFC currently is the third-worst team in MLS. They are tied with Austin FC in points but have more wins. They are also five points ahead of Eastern Conference bottom dwellers FC Cincinnati. Yes, MLS fans will say there is nothing to play for as Toronto cannot qualify for the MLS playoffs. However, they want to avoid winning the dubious award for the team that finishes with the worst record in the league.

It is unlikely they will rest their players for the Canadian Championship as their next game in that competition is on November 2 against Pacific FC. This is especially true when they can potentially eliminate their Canadian Classique rivals, Montreal, from making the MLS playoffs.

Jonathan Osorio leads the team with four goals. This is while Marky Delgado, Omar Gonzalez, Yeferson Soteldo, Jacob Shaffelburg, and Ayo Akinola are tied for second with three goals. With assists, Soteldo leads the team with five while the 2020 MLS Most Valuable Player Alejandro Pozuelo has four.

TFC has two notable injuries. One is Ralph Priso-Mbongue, who had ankle surgery on August 15, 2021 and Ayo Akinola, who had a ruptured cruciate ligament since July 18, 2021, according to transfermarkt. Both players will not play for the rest of the 2021 MLS season for Toronto.

Yeferson Soteldo hurt his hamstring against Miami and will not play against CF Montréal. Buffery did add though in another Tweet that Chris Mavinga will be available, and Omar Gonzalez is close to returning. However, whether Gonzalez returns against Montreal remains to be seen.

Montreal also has its share of injuries/suspensions. Joel Waterman for example will be out against Toronto because of a disciplinarian from MLS. Jean-Aniel Assi, Ahmed Hamdi, and Mason Toye all have injuries. They are all expected to return in late October according to sportsgambler. So, these three players may or may not play at BMO Field in Toronto. One player definitely not playing is Róbert Orri Thorkelsson, who is out with a groin strain and will not return until late November.

Another edition of the 4⃣0⃣1⃣ derby

This will be the third matchup between the two teams this year. Both teams faced each other twice with Montreal winning both games (one in Montreal and one at Fort Lauderdale). They will look to remain unbeaten against Toronto this year as they travel to BMO Field for the first time this year. This is while Toronto will look to dampen the playoff chances of their Canadian Classique rivals CF Montreal at BMO Field.

It would be nice for Toronto to get a win against the Canadian Classique rivals. However, TFC has given up the most goals in the league. They are playing at home though, which should give them the advantage to get at least a point against Montreal. Canadians can watch the game nationally on TSN5. Also, for the Quebec viewers, the game can also be watched on TVA Sports 2.