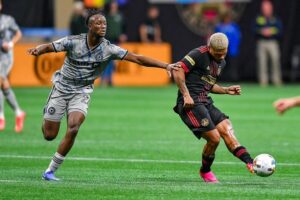 ATLANTA – CF Montreal had a two-goal lead with less than ten minutes left but Atlanta stormed back to get a draw in the dying minutes.

CF Montreal have epic collapse but salvage draw with Atlanta

A slow start but quick turnaround for Montreal

Things didn’t get off to a good start for Montreal as six minutes off a bad turnover Josef Martinez recovered the ball and riffled it top shelf on Sebastien Breza for the early 1-0 lead. Montreal responded in the 28th minute as they found themselves on a two on one and Djordje Mihailovic faked out Brad Guzan to make it 1-1.

Montreal took the lead in the 36th minute as Ismael Kone scored with a great pass from Mihalovic and powered the ball into the back of the net to make it 2-1 for the visitors. In the 40th minute, Montreal earned a penalty as Kone was taken down and the ref pointed to the spot.

Romell Quioto took the penalty and make no mistake beating Guzan with a shot right down the middle to make it 3-1 and gave themselves a two-goal heading into halftime. He was it again a couple of minutes later when he found himself one on one with Guzan but this time the keeper was able to make the save.

Montreal tries to hang on but can’t

Montreal kept pressing in the second half and in the 59th minute it was Lassi Lappalainen with a great chance to score but his shot just went wide of the net. Things went from bad to worse for Atlanta as in the 66th minute as Dom Dwyer was shown a straight red card for a studs-up tackle on Joaquin Torres and they were reduced to 10 men.

Being down to ten men didn’t detur the home side as they kept pressing and in 84th minute got within one when Hugo Almada was able to fire off a great shot that beat Breza top shelf as he was diving to stop the ball. Five minutes were added to the 90 and in the 92nd minute, Atlanta tied the game off a free kick from Brooks Lennon that was able to go off Breza’s fingertips and in.

That play was the final play of the game and the game ended dramatically in a 3-3 draw Montreal remained winless this season so far.

“This result is hard to accept. The match was finished at 3-1. We needed better decision-making. Our objective was to move the ball laterally and attack them. But our decision-making was not good. We lost the ball in the final third and didn’t finish when we had the chances in their end. We knew their players would push for the last 15 minutes. But we had control of the match. They scored twice in situations they didn’t provoke themselves. We lost possession at bad moments.”

CF Montreal will now have some time off due to the international break and won’t be back in action until April 2nd when they will travel to Ohio to face FC Cincinnati at TQL Stadium.

The post CF Montreal have epic collapse but salvage draw with Atlanta appeared first on Last Word On Soccer.