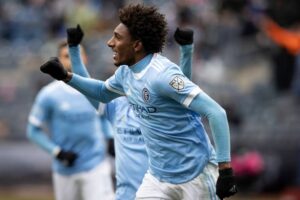 NEW YORK – CF Montreal is still looking for their first win of the season after getting dominated by the defending MLS Cup champions NYCFC losing 4-1 at Yankee Stadium in the Bronx.

Another slow start for Montreal

Five minutes into the first half it seemed the home side was pressing early looking for an early goal and Montreal again was off to a slow start and in the 7th minute, NYCFC scored the opening goal when Alexander Callens managed to volley kick the ball into the back of the net.

New York kept controlling the pace of the game and Montreal had some chances but nothing on target and Joel Waterman had a golden opportunity off a corner kick and a great center from Rida Zouhir but as he tried to tap it into the net he deflected the ball out of bounds.

NYCFC doubled their lead in the 20th minute as Santiago Rodriguez caught Sebastien Breza out of his net and managed to lob the ball over the goalkeeper’s head. Breza made his first big save of the game in the 30th minute off a great shot from Valentin Castellanos.

Two minutes later he made another brilliant save on Talles Magno and again Montreal looked like they were on the backfoot. Breza made another critical save in the final minute of the first half on Magno again and the teams went into the locker room with the visitors down by two.

Montreal fights back but it’s too late

Wilfred Nancy made three changes at the beginning of the second half bringing in Djorde Mihalovic, Zachary Brault Guillard, and Robert Thorkellsson for Alistar Johnston, Lassi Lappalainen, and Rida Zouhir. Three minutes in Montreal had a huge chance to score but Brault Guillard’s shot rang off the post and stayed out.

Brault Guillard had a second chance in the 52nd minute and this time he managed to get the ball into the back of the net to reduce New York’s lead to one. Montreal looked hungry for more and in the 54th minute got their first shot on target from Matko Miljevic and Sean Johnson the NYCFC goalkeeper made his first save of the game.

New York regained their two-goal lead in the 64th minute when Magno finally was able to beat Breza with a great header on their first shot of the second half. In the 70th minute, Victor Wanyama was replaced by Ismael Kone in the fourth substitution of the game for Montreal.

With less than 10 minutes to go in the game, Montreal made its final change bringing in Joaquin Torres for Miljevic and a minute later New York made it 4-1 as Thiago Andrade intercepted a ball from Kamal Miller and managed to beat Breza with a powerful shot that went far post.

After two minutes of injury time, the final whistle blew and CF Montreal had suffered their third straight loss.

” We just need to finish well, we need to find a way and be resilient and we have to be stronger, need to stay together and this is a bad moment and today was really difficult and we know it and we need to work at it”.

CF Monteal will refocus its attention to the 2022 Scotiabank Concacaf Champions League as they will host Cruz Azul in their next game on Wednesday looking once again to come back from a one goal deficit to try and advance to the semifinals.