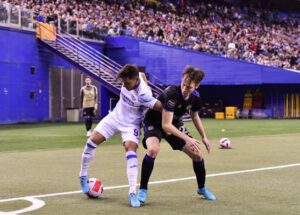 CF Montreal’s run at the 2022 Scotiabank Concacaf Champions League came to an end on Wednesday night as they drew 1-1 but lost 2-1 on aggregate in the quarterfinals.

A competitive first half

Montreal came out firing as they ran the ball down the field in the first minute of the game and Ismael Kone found Alistair Johnson did an amazing cross to Joaquin Torres whose header went into the hands of the Cruz Azul goalkeeper Sebastien Jurado.

Romell Quioto had his first scoring opportunity of the game in the fourth minute but again his ball was deflected and into the hands of Jurado. The start to the game looked way better than it did last Wednesday night at the Azteca Stadium in Mexico City.

Cruz Azul had their chance of the game to score in the 8th minute off a corner but the ball was headed just wide of the net as Sebastien Breza made a great dive to make sure the ball stayed out with the ball headed by Angel Romero. Breza made another fantastic save in the 15th minute to keep the ball out with a stunning kick stop on Uriel Antuna.

He continued to shut the door on the ensuing corner kick this time using his body to deny Cruz Azul the opening goal but the offside flag went up. In the 22nd minute, Torres had another shot on target but it wasn’t strong enough as it rolled into the hands of Jurado.

Breza was doing a great job keeping his team in the game and made another stellar save in the 25th minute on Jonathan Rodriguez as Cruz Azul was starting to fight back trying to put this game away. The visitors were starting to turn this game around taking control and putting pressure on Montreal.

Quioto had another great opportunity in the 29th minute off a great cross from Lassi Lappalainen but his header sailed wide and out of bounds. Montreal had a great chance in the 41st minute off a corner from Djorde Mihailovic that was headed on target by Rudy Camacho but Jurado made the save.

Cruz Azul opened the scoring in the 44th minute off a bad turnover from the Montreal defense and Romero found Antuna with a great shot that beat Breza far post to make it 1-0 and 2-0 on aggregate.

Wilfred Nancy made his first change of the night taking out Robert Thorkelsson for Kei Kamara looking to get more offense needing three goals to advance. Kamara thought he scored in the 53rd minute but his ball was headed wide. Nancy made his second change in the 56th minute taking out Kone for Matko Miljevic.

Montreal was pushing hard once again and in the 70th minute Quioto found himself all alone on Jurado but the keeper was able to make the save to keep the ball out of the net. Five minutes later Montreal earned a free-kick but it went right into the hands again of Jurado.

Camacho finally scored in the 77th minute off a corner with an amazing header that tied the game at one but Montreal needed two more to advance. Alistair Johnston came out and was replaced with Zachary Brault Guillard right after the goal.

Montreal had three amazing chances to score in the 90th minute with a great run by Quioto whose shot was blocked by Jurado but on the rebound had two more cracks at it but couldn’t find the back of the net. Six minutes were added to the 90 to give Montreal one last chance.

” In the first half, we had a couple of opportunities with balls in the box and we had more opportunities in the second half and the guys pushed for that and we conceded that goal and we thought if we equalized we had a good chance of winning and now we have to move forward and keep going”.

The loss eliminates CF Montreal from the Concacaf Champions and will be back in MLS regular-season action this Saturday afternoon as they travel to Georgia to face Atlanta United FC.