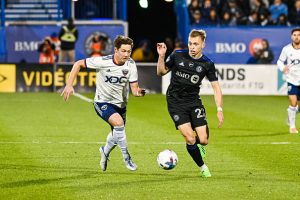 MONTREAL, QC – CF Montreal will head into its final game of the MLS season with a chance to win the Supporters’ Shield and a first-round bye in the playoffs.

Montreal got the better of D.C. United, who suffered their 20th loss of the regular season thanks to an own goal by Donovan Pines.

“I congratulated my players tonight for the consistency they have had all year. What they’ve been able to do in 34 games, to be consistent like that, it’s strong. A 19th win in MLS is a big achievement. I’m proud of this group. Whatever happens, they always try to progress. The team continues to do well right now and I’m happy for them.”

Under clear skies and another sellout crowd at Saputo Stadium of 19,600, the home team got off to a better start taking control of the game early. Joaquin Torres got the first shot on target of the game in the 20-minute but it was saved by the D.C. keeper David Ochoa.

Eight minutes later, Montreal kept peppering Ochoa but couldn’t finish so the game remained scoreless, and in the 34-minute, it was James Pantemis, who got the start in the net with his only save of the first half. Seven minutes later came the only goal of the match as a shot got deflected off Pines and into the back of the net as Mason Toye slid to make sure it went in.

The goal was originally given to Toye but then it was confirmed that it was indeed an own goal and things got worse for Pines as in the second half he was shown a red card for a hard foul in the box and the visitors were reduced to 10 men for the rest of the game.

Rudy Camacho who was part of the solid Montreal backline commended his team on a great second half that was built on control and possession.

“In the second half, we continued to play as we usually do. We tried to push for the second goal to make sure we were safe. We almost took a goal on a set piece. We’ll have to keep this solidity to go as far as possible in the playoffs.”

Ismael Kone, who was fresh off representing Canada in international duty last week, played another impeccable game and continues to show his talents on the field.

“I think I was able to show my qualities tonight and the coach trusted me. I had to adapt to my position. I’m used to being versatile, no matter what position I play in midfield. It’s even better for me in some ways to play further forward on the field. As a 10, I have the whole field in front of me that I can exploit. In a way, I like that.”

It was also announced before the game that Romell Quioto was out due to a thigh injury that he picked up in international duty playing for Honduras and it wasn’t confirmed how long he could be out. CF Montreal will now head to Florida to play Inter Miami at DRV Pink Stadium and with a win and a Philadelphia Union loss will clinch first play in the Eastern Conference and a first-round bye in the playoffs.

This season has been incredible for CF Montreal, who have now won three-straight games and are in a five-game unbeaten run. The other two wins came against the Chicago Fire FC and the New England Revolution. They have also drawn against the Columbus Crew SC and won against their 401 Derby rivals, Toronto FC.