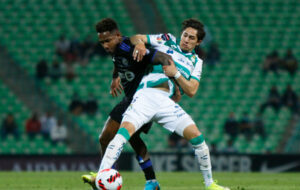 CF Montreal booked their spot in the quarterfinals of the Scotiabank Concacaf Champions League after a dominating performance against Santos Laguna in front of their home fans at Olympic Stadium in Montreal.

Montreal comes out to play

CF Montreal started the match aggressively and in the first minute earned a corner but it was headed out of danger by the Santos Laguna defender. The home side kept attacking and it looked they were hungry for the early goal to knot things up.

In the seventh minute, the home side earned another corner kick but again was denied by the defense of Santos Laguna, who seemed on their toes. A minute later, Montreal equalized as Romell Quitoto got a great pass from Victor Wanyama and managed to beat the keeper to make it 1-0.

Montreal at this point of the game was dominating in possession and seemed on the front foot with almost 60% of the possession. Djorde Mihalovic doubled Montreal’s lead in the 22nd minute when he got a great feed from Quioto and shot the ball top post past Carlos Acevado.

Things got heated in the 34th minute when Joel Waterman and Artyon Preciado got into a bit of shoving match and Waterman was shown a yellow card. On the ensuing corner, Sebastien Breza who got the start in goal made a routine save to keep their two-goal lead.

In the 44th minute, Santos Laguna got their first shot on target with a knuckleball that seemed to catch Breza off guard but he was able to make the save. A minute later, Mathieu Choniere off a corner got a great shot from distance that went off the crossbar and stayed out.

A minute of injury time was added and Montreal went into the locker room up two goals, 45 minutes away from a win a spot in the final eight of the Scotiabank Concacaf Champions League.

Bow down, Djordje Mihailovic! He gives @cfmontreal their second goal of the night.#MTLvSAN | 2-0 | #SCCL pic.twitter.com/3bzTf1qPyj

Montreal got off to a great start at the beginning of the second half and a couple of minutes into it they had a great chance to make it 3-0 when Quioto got a great shot off . Acevado made a great save and Mihalovic missed the rebound.

Things got heated several minutes later as Waterman was taken down and upon further review, Kamal Miller and Brian Lozano were shown yellow cards. Montreal kept pressing and in the 53rd minute Ismael Kone got another shot on goal but Acevado made another save to shut the door.

In the 56th minute, Montreal earned another free-kick and Miller tried to head it in but Acevado denied him with a diving grab save. A minute later Quioto was shown a yellow card for a dangerous trip and it seemed like things were getting physical.

Kone made it 3-0 a couple of minutes later when he got a great pass from Mihailovic for his first goal in his first game with the club with a great powerful shot. Wilfred Nancy made his first change in the 64th minute subbing in Alistair Johnston for Waterman.

Nancy made two more changes bringing in Zachary Brault Guillard and Kei Kamara in the 74th minute for Romell Quioto and Lassi Lappalainen. Kamara was making his Montreal debut after signing a deal with the club earlier in the week.

Montreal made two more changes in the 85th minute bringing it Matko Miljevic for Torres and Rida Zouhir for Mihailovic and five minutes later the fourth official showed four extra minutes on the clock for injury time and four minutes later the final whistle blew.

“This is the way we want to attack which we did well tonight and the team is happy and we won with humility and I am pleased with the victory tonight.”

CF Montreal will now await the winner of the round of 16 matchup between another Canadian club Forge FC from Hamilton or Cruz Azul from Mexico City.