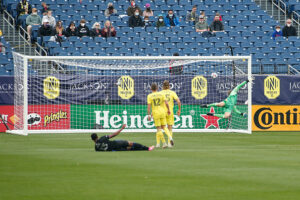 CF Montréal blows lead against Nashville at Nissan Stadium. Montreal had a two-goal lead after the end of the first half. However, Nashville scored two goals in the second half. This included one late goal in the 77-minute to earn the tie against Montreal.

Montreal hit the road for the first road game of the season with a trip to Nashville to take on Nashville SC at Nissan Stadium. The visitors once again got off to a fast start putting pressure on the home side early. In the third minute, we saw Montreal’s first real chance when Djorde Mihailovic intercepts a pass but his shot would hit the iron. Two minutes later, Mustafa Kizza had a chance but couldn’t find the back of the net.

Once again it was Mason Toye who would score the opening goal of the game in the 13-minute. His goal was an almost identical shot to the goal he scored last week against Toronto FC when he got a great pass and beat the Nashville goalkeeper with another high curling shot.

In the 20-minute, Montreal had a free-kick but Kizza’s shot would right into the hands of Nashville goalkeeper Joe Willis. The home team was on their heels feeling the pressure. Three minutes later Montreal got a scare when their keeper Clément Diop got some interference from Jhonder Cádiz, who would run into him but he would be ok.

The home side finally got their shot on target by Hany Mukhtar. However, Montreal goalkeeper Diop was there to make the diving save and keep the 0-1 lead. Nashville was starting to get more chances and we could see the momentum was starting to swing in favour of the home team.

Cadiz had a great chance in the 35-minute but Diop was there to punch it away and make the great save. Three minutes later we had a bit of drama when Diop got some more contact and we saw James Pantemis warming up thinking he would replace him but he stayed in the game.

Zachary Brault-Guillard would double Montreal lead a couple of minutes later. He would run up the side of the field and beat Willis with a great shot to make it 0-2 for the visitors. The first half would finish and once again Montreal went into halftime with a two-goal lead.

Less than three minutes into the second half Romell Quioto thought he had his second goal of the season but his shot would beat the keeper but miss the net. Nashville would finally get on the board in the 54-minute when Cadiz would head in a ball to make it 1-2.

The goal would immediately go under video review for a potential foul on the goal but upon further review, the goal was given and Nashville was back in the game. In the 60-minute, Montreal made its first substitution of the game switching Mason Toye for Erik Hurtado.

On the ensuing play, Nashville got a shot on goal but it deflected off Victor Wanyama hand and the home side went crazy appealing for a penalty but the ref didn’t bite and no penalty was given. It seemed like Montreal was hanging on to their one-goal lead and the possession showed with a 60-40 advantage for Nashville.

In the 66-minute, Nashville got a dangerous chance to score but Diop made an amazing save to keep Montreal’s lead alive, four minutes later Mihailovic finished a great passing play with Hurtado and got a great shot on target but Willis would make the save.

Turn it up, Hany.

Hany Mukhtar would tie the game at two in the 77-minute with a big strike late in the game and now both teams were level. On the ensuing play, the momentum stayed with Nashville and they got two incredible shots but once again Diop was there to make the saves.

CJ Sapong thought he gave Nashville the lead but Diop was doing whatever he could to keep the game tied. In the 84-minute, both Zorhan Bassong and Amar Sejdic came in hoping to spark the offence and score that game-winning goal. Hurtado would finally get his first shot of the game on target but it was saved by Willis.

After four minutes of added time, the final whistle blew and the game finished in a 2-2 draw. Montreal will now focus on its next match when they will face the defending MLS Cup champions the Columbus Crew. The game will take place on Saturday, May 1 at 3:00 p.m. ET.