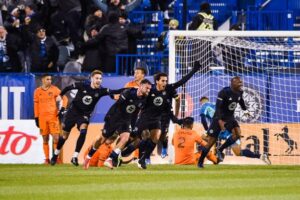 A tight battle in the first half

In the first 20 minutes of the game, Montreal was pressing early looking for the game’s first goal against a team that was looking for their first road win of the season. The home side was struggling to get a shot on target as Ahmed Hamdi and Djordje Mihailovic led the offense.

The first half finished 0-0 with both playing a tight defensive game and both teams still looking for that first goal.

The second half started with the Dynamo pressing and in the 50th minute, Lassiter got another great shot that Breza would tip out of bounds with his hand. Breza made another save two minutes later on Memo Rodriguez to keep the score 0-0.

That goal would be enough for Montreal to take a 2-0 win and with one more game on Sunday are that much closer to booking a spot in the playoffs.

“I’m happy for the players. It was not an easy game emotionally. I liked the start of the game and the first half. Football is extraordinary because we scored when we were a little less dominant. Kudos to the players because they did the work to get us in a position to play a final against Orlando.”

Once again it will come to the last game of the regular season as Montreal will look to clinch a playoff spot against Orlando City at Saputo Stadium on Sunday afternoon.