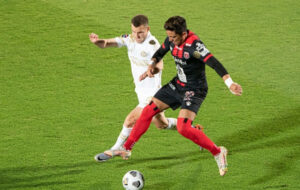 Would the CONCACAF Champions League truly be a CONCACAF tournament without chaos? The Round of 16 started off with a bang on Tuesday night when Atlanta United took a trip to Costa Rica to face off with Liga Deportiva Alajuelense.

Controversy surrounded Atlanta’s away victory in Costa Rica on Tuesday night. The phrase “Concacaf’d” became attached to the Costa Rican club in the 50th minute, when the referee incorrectly called a penalty on Alajuelense, claiming a handball in the box, when a replay showed the ball hit off the face of a LDA defender.

Almost as egregious was a sudden switch of a yellow to red card for Brad Guzan. While the Atlanta United goalkeeper clearly committed a DOGSO foul outside of the box, the referee originally pulled out a yellow card. Soon, referee Héctor Said Martínez was swamped by Alajuelense players screaming about the foul.

Martínez switched the color of the card and Guzan was sent off. In came 18-year-old Argentine goalkeeper Rocco Ríos Novo. Guzan will be out for the second leg, which will be held in Atlanta next week.

Back to the penalty, after the controversial call, Ezequiel Barco stepped up to the line and slotted his PK past Alajuelense goalkeeper Leonel Moreira.

Alajuelense has a hill to climb when they head to the United States next week. The away goal is going to help Atlanta. However, losing out on Guzan is going to hurt. Novo was admirable in net, but was better at blocking the ball than he was catching the ball.

What’s Next for Atlanta United and L.D. Alajuelense?

The two sides will meet up for Leg 2 on Tuesday night at 6 p.m. EST. Alajuelense needs two goals to equalize, due to the Atlanta away goal. The match will air on FS1 and TUDN.