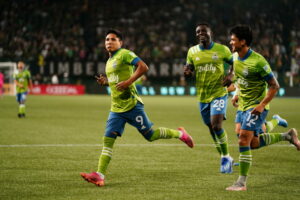 The Seattle Sounders went into Providence Park and demolished the Portland Timbers, 6-2. Fredy Montero and Raul Ruidiaz each had two goals. Jimmy Medranda scored an absolute banger in the 78th minute. And, as colleague Matt Pollard noted on Twitter, Nicolas Benezet scored more goals in just eight touches than he did for the Colorado Rapids in two years.

Nicolas Benezet now has more goals with #Sounders than he did with #Rapids96, with one.

It was Benezet’s debut and, as Brian Schmetzer noted in the locker room after the match, it only took him eight touches to get on the scoresheet. The Sounders went into the fortress that is Providence Park and put on a show. Montero was the player to strike first, hitting the first two consecutive goals. Montero’s first was off a rebound after a save from Timbers goalkeeper Aljaz Ivacic. His second, though, was pure class. At the top of the penalty area, Montero hit a laser past Ivacic for a screamer.

Ruidiaz followed in Montero’s steps with stellar goals. After Sebastian Blanco brought one back for the Timbers and then the home side equalized off a George Fochive slanted-angle shot, Ruidiaz re-took the Sounders lead. The Peruvian international hit a shocking free kick past the entire wall and toward the far post for the 3-2 lead.

His second was similar to Montero’s first, picking up the rebound after Ivacic made an initial save. Then, just a few minutes later, it was Jimmy Medranda that stole the show with a stunning strike.

Benezet scored the sixth and final goal to send Seattle back with three points.

Immediately after the win, the cameras panned to Sounders head coach Brian Schmetzer. He was all smiles. It almost gave reminiscence about the “Feeling better than Bob” comments against LAFC. Schmetzer has had so many injury troubles this year. He’s still waiting on the return of Nouhou and Stefan Frei. Meanwhile, Jordan Morris and Jordy Delem both tore their ACLs earlier this year.

Schmetzer spoke after the game about how tough the Sounders players are.

“The quality of our team just showed through,” Schmetzer said. “That team was so motivated right there… They are in there, that’s their team. They are so committed to themselves as individuals and as a group. I don’t have to do much coaching.”

Without a doubt, the Timbers-Sounders rivalries is one of the best in MLS — if not the best overall. Last night was a perfect example of just a downright crazy MLS game. This league is fun and the rivalries are even better.

And, hey, the Sounders players got to warm up their vocal cords for another round of “Jingle Bells.”

The post Cascadia Derby brings fireworks as Sounders top Timbers, 6-2, on the road appeared first on Last Word On Soccer.