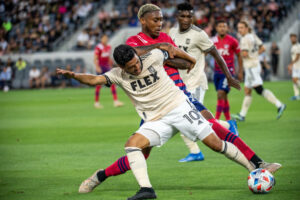 Los Angeles, CA – It was just what LAFC needed. A class performance from their star striker, a solid win at home, and three points before the team head off for a brief road trip. After a rocky start to the season after an early injury, Carlos Vela sparks LAFC in the win at home, over FC Dallas.

Carlos Vela wasted no time in announcing his presence last night. In just the fourth minute of the match, midfielder Eduard Atuesta picked out Carlos Vela with a precise pass, and Vela does what comes best. Took a touch to set up, and then deployed his left-footed laser. While it did seem like the start to a long match for the visitors, it was actually the only goal in the first half.

While the floodgates didn’t open in the second half, LAFC were able to keep a desperate Dallas side from finding the equalizer. FC Dallas finished with 13 shots to LAFC’s 19, but could only muster one shot on goal for the night. The black and gold doubled their lead in the 68th minute, courtesy of the Carlos Vela to Latif Blessing connection. Blessing timed his run so perfectly, the original call was offside, but a trip to VAR proved otherwise. While the celebration was lacking, the energy was not, as LAFC secured three points, and one of their better offensive performances on the season.

Don’t Say ‘Their Back’ Just Yet

Her comes the wet blanket of reality to spoil the fun, not totally though, promise! One match and one win, especially against the literal worst team in the Western Conference, does not constitute a run. Even Carlos Vela acknowledged there is still much left to do before getting back to top form. Speaking to media after the match, Vela said “I think we have a good [amount] to prove. We won one game, but we have to get the rhythm. We have to win two, three, four in a row, and after that, maybe we can say we are back.”

While it seems harsh, it is true. LAFC should’ve won that match, and they should’ve done so easily. The fact FC Dallas kept it as close as they did for most of the match, is a bit concerning. However, three points is the objective, and you can only play who’s in front of you. Saturday the black and gold have a tougher test in second-placed Sporting KC.

Getting Carlos Vela going has been most important for LAFC. He is the offense, and as he goes, so does the team. When he is not available, or off his game, it shows not only in the final results, but in the performances of the team as a whole. The early goal was more than a moment of brilliance, it was the culmination of what we had seen most of the season. It was a great build-up starting in the defense with Kim Moon-Hwan, and featured precise passing and movement, and finally ended with a goal. In addition to netting his first of the season, Vela providing the assist on the Blessing goal is a good sign for the future. Vela seems to be finding his rhythm, which can only mean good things ahead for LAFC.

Newly acquired defender, Kim Moon-Hwan, and goalkeeper Tomas Romero both made their starting debuts last night. Moon-Hwan arrived with plenty of fanfare, but a previous injury, and in-form Tristan Blackmon, have kept him from the starting XI early on. However, with the full schedule ahead, its time to bring the depth into the fold. Unsurprisingly, Moon-Hwan did well in attack, providing a different dimension and pace to the right flank. However, he did struggle at times with defensive responsibility, keeping the ball in front of him while tracking back, and preventing attackers from getting around him. Every player experiences an adjustment period, so all things considered, it was a great night for the South Korean International.

Tomas Romero was able to keep the clean sheet in his debut. While he didn’t face much pressure from the FCD attack, he credited the easy night to a stellar performance from his defense in front of him. “It was a very special night for me. The defense made it easy for me. So did the attack, going up in the fourth minute, takes a lot off a lot of pressure.”

Getting into the win column is the most important thing for the black and gold right now. They currently sit as a mid-table team, in an early fight for a playoff position. Last night, the top teams continued their form, with Seattle and Galaxy both coming away with wins. You should never scoff at a win, but you should also be objective with the reality. FC Dallas are a bottom-dwelling team, and this win was expected. In fairness, it should’ve been by an even greater margin. However, a win is a win, and now, comes an even tougher test this weekend. Saturday LAFC travel to Kansas City to take on Sporting KC, the first of a three match road trip. If they want to truly get back on track, they will need to prove themselves against the best teams in the Conference.