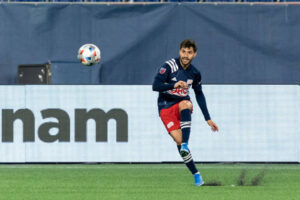 FOXBOROUGH, Mass. – The New England Revolution and Carlos Gil hosts Atlanta United and Marcelino Moreno on Saturday night. The Revs were looking to remain unbeaten in league play. Gabriel Heinze’s side were coming off a tough loss in CCL midweek, and rotated the squad.

The Revs were by far the better team in the first half, attacking in waves with Gil pulling the strings. Atlanta struggled going forward with Josef Martinez and Ezequiel Barco not starting. Erick Torres started up top and didn’t do much with the touches he got.

Brandon Bye opened the scoring on 19 minutes. After two chances on set pieces, New England cycled the ball back into the box. Gil found Bye on the run wide open for a header that he directed into the nearside corner of the net. He didn’t even have to lunge or jump.

Bye had a tough end to the half, as he clipped Moreno from behind in the box after the attacker got around him. The No. 10 stepped to take the penalty and converted it.

Atlanta tried to stabilize things in the second half with Miles Robinson and Barco subbing on to start the second frame. That didn’t last long as it took less than 10 minutes for the home side to retake the lead.

Gil and Bye combined at the top of the box before Emerson Hyndman made contact with the outside back. Head official Chris Penso went to the monitor at the recommendation of the VAR, and ruled the play a penalty. The camera views weren’t great with the contact appearing to be close to the line for the 18-yard box.

Gil took the PK and converted it, with a stutter step that saw goalkeeper Brad Guzan not even dive for the ball. The match ended 2-1.

Carlos Gil and Brandon Bye lead the attack: Gil once again led the attack in the No. 10 role as is putting up MVP production three games into 2021. Bye got his first goal of the season and looked great as an overlapping right back.

VAR: Atlanta fans might be upset about VAR getting involved in the call that decided the game. That said, the Revs thoroughly outplayed them. Another camera angle might surface showing Hyndman did make contact on Bye inside the box.

Atlanta struggle with Josef recovering: Atlanta United have had a tough week with losses in Champions League and MLS. The offense has struggled with Josef Martinez still working his way back to fitness from his ACL injury last year. They clearly need him soon if they want to compete against good teams across multiple competitions.