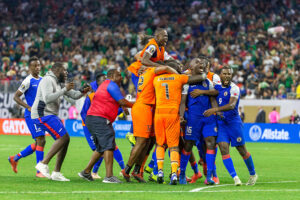 PREVIEW – The CanMNT vs Haiti game is must-watch television for the neutral observer. This will be the third time in two months that these rivals have met each other. They also faced each other in the 2019 Concacaf Gold Cup.

16′ #CanMNT responds! Cyle Larin’s header ends up in the back of the net from a terrific Junior Houlett cross. #OneSoccer#CANvMTQ | 1-1 | #GoldCup21pic.twitter.com/OscK1r1ST1

The CanMNT won their first game 4-1 against Martinique (a link to the Cyle Larin goal for the American viewers) The game did not start off well as Canada gave up an early goal in the 10-minute. Canada though was able to respond and score six minutes later with the Cyle Larin goal. Credit should also be given to Junior Hoilett on that goal. His terrific cross allowed Larin to make contact with the ball with his head. Canada would score three more goals and defeat Martinique 4-1. CanMNT’s head coach, John Herdman was happy with the performance. More importantly, he was happy with how they came back from behind to win the game.

“What I’d said is it’ll be a gift because it’ll give us our chance to respond. And that’s exactly what they did,” he added. “They were unfazed and we needed those sort of tests. I congratulated them in the dressing room at halftime. It was a wonderful response to that moment.”

If one looks behind what Herdman is saying, it makes sense. There might be times in the Gold Cup or the World Cup qualifying where Canada may be losing the game, something they have not experienced yet in the 2022 World Cup qualifying. The fortitude and resilience to come back from losing in a game is an important lesson for this very talented CanMNT. Haiti will most likely bring a tougher challenge than Martinique. Canada knows full well what Haiti brings to the table.

The Haitians are recently coming off a 1-0 loss against the United States of America. They may have lost but put a valiant effort against the Americans. This was especially true when five Haitian players were tested for COVID-19 before their game against the U.S according to Yahoo! Sports.

Haiti 1-0 at Children’s Mercy Park in Group B action thanks to a Sam Vines header.#ThisIsOurs #GoldCup21 pic.twitter.com/B0DEbl2EsN

In the eighth minute USMNT player, Gyasi Zardes produced a great cross to Sam Vines. Vines then put the ball into the back of the net (a link to Vines’s goal for the American viewers). The U.S. was also the better team at the end of the day. This is what Haitian head coach Jean-Jacques Pierre said about the game against the United States of America and the upcoming game against Canada:

“The other two teams won we saw. A 0-0 would have been good. We will fight and now we are going to do that against Canada. We are trying to find a positive result, which will enable us to qualify for the last match.”

The U.S. only winning 1-0 Haiti was not a big surprise. It is important to note that they defeated both Costa Rica and Canada in the last Gold Cup. Haiti also almost defeated Mexico in the Concacaf Gold Cup semi-finals in 2019. This is not going to be an easy game, even with Haiti missing many of their players due to COVID-19.

Both CanMNT and Haiti have met each other three times in the last three years. Haiti eliminated Canada from the 2019 Concacaf Gold Cup. A big reason for that is the mistake made that gave Haiti the first goal against Canada. They would end up winning that game 3-2 over Canada. Canada though would get their revenge in FIFA World Cup qualifying. They won leg one 0-1 in Port-au-Prince, Haiti. Canada would also win 3-0 against Haiti in leg two. In that game, the Haitian goalkeeper Josué Duverger made an error by putting the ball back into his own net.

Semifinalist of #SCL20 and participant of #SCCL2021.

A similar thing happened in club soccer. Forge FC (based in Hamilton, Ontario) of the Canadian Premier League was in control of the game and winning the game 0-1. However, Forge FC goalkeeper Triston Henry made an error with the ball. The Haitian-side Arcahaie FC (based in Arcahaie, Ouest) took advantage. They tied the game and won the game via penalty kicks against Hamilton. This meant Arcahaie FC made their first-ever Concacaf Champions League appearance in 2021. In that competition, they were eliminated by Cruz Azul in the Round of 16.

However, historically speaking, the matchups between CanMNT and Haiti has been lopsided. In 13 games played between both teams, Canada has won nine of them, with the other four being two ties and losses each against the Haitian side.

The Canada-Haiti game as mentioned before is much-watch television. There have been memorable history between these nations in Concacaf. The first being Haiti going to the Concacaf Gold Cup semi-finals in 2019 by defeating Canada. It was the best performance by the Haitian team since 1977 when the Concacaf Gold Cup was known as the Concacaf Championship.

#CanMNT celebrate their spot in the Concacaf Octagonal stage of World Cup Qualifying, their first time making it to this round since 1997

We hope to see this team and our loyal supporters BACK on Canadian soil for these upcoming matches!

The CanMNT even without Alphonso Davies and Jonathan David is still a team to be reckoned with. A factor made into this prediction was Tajon Buchanan’s speed against Martinique, which had an influence in making this prediction. It will be a tough game though, as Haiti is a very physical team. The Haitians are also familiar with the Canadian men’s national team including most of the players that play with Canada.

The game between CanMNT and Haiti will start at 7:30 p.m. ET on Thursday. The game will take place at Children’s Mercy Park in Kansas City, Kansas. Canadians can watch the game live on OneSoccer.