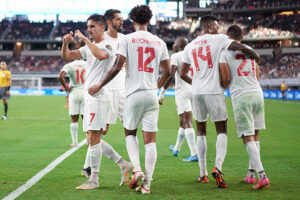 The boys are BACK.

@AlphonsoDavies, @AtibaHutchinson and the rest of the #CANMNT boys have touched down in Toronto. #WCQ pic.twitter.com/IbYMVUNWby

The CanMNT looks quite strong. This is especially true with players like forward Lucas Cavallini and left-back and winger Alphonso Davies playing for the team. According to transfermarkt, CanMNT is the third most valuable team in all of Concacaf. Their market value is $179.99 million. This statistic does not necessarily mean Canada will qualify for the 2022 FIFA World Cup. However, it shows the quality that they have. The quality of their players has been shown in the previous rounds of the 2022 FIFA World Cup qualifying and in the 2021 Concacaf Gold Cup.

A lot of people consider Davies is currently the best player in Concacaf. He was the first-ever Concacaf player to make FIFA Best Men’s World XI last year. There is also forward Jonathan David, who currently plays for Lille OSC. He played a major role in Lille winning the Ligue1 title in France.

Seeing what the roster is, this is not a surprise. Canada’s player of the Gold Cup, F.C. Paços de Ferreira midfielder Stephen Eustáquio and also Reading player winger Junior Hoilett is part of the team. Winger Tajon Buchanan of the New England Revolution also made an impression in the Gold Cup.

CanMNT: How they Fare against Other National Teams?

The last away win between the 8 CONCACAF WCQ Final Round teams. pic.twitter.com/LWmB08Oq5o

Well, their recent history is not good. The one that CanMNT seems to have a favourable advantage against though in Costa Rica. This included eliminating them from the 2021 Concacaf Gold Cup. They also have a decent record against El Salvador, having a 2-1-2 record in the last four games. However, El Salvador won the last competitive match between the two teams in 2017.

However, when just looking at this century, it has been at least a bit one-sided with the other five teams in this group. Canada was eliminated by Jamaica in the 2017 Concacaf Gold Cup. Yes, people will point out that Mexico lost to Canada in the 2000 Concacaf Gold Cup. However, in recent years, they have not played well against them. This includes the 2018 FIFA World Cup qualifying cycle where Canada lost both games against Mexico.

Now, they played better in the 2021 Concacaf Gold Cup. They showed the ability to play toe-to-toe with the Mexicans, which was not the case in the 2018 FIFA World Cup qualifying cycle. They still lost, but CanMNT showed improvements.

The two teams that CanMNT may have the worst memories though are Panama and Honduras. In the 2002 FIFA World Cup qualifying cycle, CanMNT finished higher than Panama. This included getting a win at the Winnipeg Soccer Complex in Winnipeg, Manitoba.

Then in the 2011 Concacaf Gold Cup, CanMNT was a second away from advancing to the 2011 Concacaf Gold Cup semi-finals round. Dwayne De Rosario, CanMNT’s current all-time leading goal scorer, scored on a penalty in the 62-minute. A goal that could have sent CanMNT to the quarter-finals. However, Luis Tejada of Panama scored the game-tying goal in the 90+1-minute of play. This goal meant that the game was tied. More importantly, it meant that CanMNT was eliminated from the Gold Cup and Panama advanced to the quarter-finals stage.

“I just think of the necessity to fight. On that day I really felt for the players.”

The last competitive match between both teams was a scoreless draw in the 2017 Concacaf Gold Cup.

Be part of this moment.

This is not going to be easy, especially against Mexico and USA. A lot of these teams do have experience playing in the final round of FIFA World Cup qualifying. Canada does not and it will play a factor. However, CanMNT’s roster is also filled with talent and should be a team to be reckoned by any Concacaf team.

The top three teams make it to the 2022 FIFA World Cup. This is while the fourth-placed team will play in an inter-continental two-leg tie against either an AFC (Asia) OFC (Oceania), or CONMEBOL (South America) team.

The ball over the top from Eustaquio

The ball over the top from Junior!!! pic.twitter.com/t4WrmOAFZA

This may be the first time in the 21st century that CanMNT makes it to the final stage of Concacaf World Cup qualifying. However, it is also true that CanMNT possesses a talent that many Concacaf nations will envy. Davies, David, Larin, Hutchinson, and Eustaquio are four players that come to mind. That is also not including other players from this squad like Buchanan, Steven Vitória, and Milan Borjan.