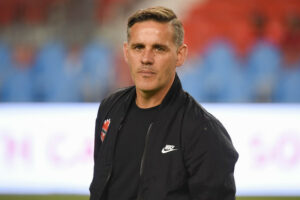 The CanMNT November Roster Analysis and Games Coming Up

For FC Bayern Munich forward, winger, and left-back Alphonso Davies, the November window will be a special one. This will be the first time he will play an important game in Edmonton at Commonwealth Stadium. Davies grew up in Edmonton and played for local clubs like the Edmonton Internationals (2005) and the Edmonton Strikers (2006-14). This is what Davies said about the occasion according to OneSoccer:

“A homecoming game and ever since I left midtown was the first time I’m returning playing in front of the city.”

Davies in the same interview also talked about not being able to play with the Vancouver Whitecaps when FC Edmonton played them at Commonwealth Stadium. He will most likely play a big role in both games. He is a player with great speed and can create scoring opportunities for himself and for others.

THE GREATEST LEFT BACK.

Davies played a big role in Canada’s last game. In that game, he was involved with three of Canada’s four goals. This included his own goal, which gave Canada the 2-1 lead at the time.

The Addition of Iké Ugbo and the Omission of Jacob Shaffelburg

Ike Ugbo is the most notable and the only addition to the CanMNT. He is a forward for Genk, the top league in Belgium. Ugbo has so far scored two goals in nine games for the club. He is also a product of the Chelsea Academy and won the UEFA Youth League with Chelsea in both 2014-15 and 2015-16 editions. Ugbo also had great spells with Belgian side Cercle Brugge K.S.V. (16 goals in 32 appearances) and Dutch side Roda JC Kerkrade (16 goals).

With the injuries the CanMNT suffered in the October window in the striker position, Ugbo will be a welcome addition. He is most likely replacing Jacob Shaffelburg, who also plays the forward position for Toronto FC. This is what CanMNT head coach John Herdman said about the addition of Ugbo according to CPL Soccer:

“The conversations I’ve had with (Ugbo) and his people, they’re expecting him to have a big season toward the end of this year and next year, and build a career similar to a Jonathan David.”

A product of @ChelseaFC
Now shining at @KRCGenkOfficial

Welcome to the brotherhood, Iké

This is a huge compliment to Ugbo as Jonathan David is the top scorer in Ligue 1 with nine goals for Lille OSC. Herdman would also compliment Ugbo with his ability to play behind the two centre-backs. Credit should also be given to Herdman, who found a way to convince Ugbo, a player who played with the English U-17 and U20 teams to play for Les Rouges.

Other Players That Did Not Make the November Roster

It is important to point out that there were other players that did not make the cut in the November roster. This is because the November roster was 23 while the October roster was 27. This was because of injuries to several players like Milan Borjan, Cyle Larin, and Atiba Hutchinson. As a result, Herdman hoped that these players would return for at least one of the games in the October window. A hope that unfortunately did not come true.

However, this time those three players mentioned above are healthy as of right now. As a result, the November roster has the same size of 23-players as it did in the September roster. There will also be less of a need to rest players. This is because unlike other Octagonal World Cup qualifying windows, which are three games, this window will only play two games. This means players are less likely to rest games in the November window.

Other players not in the November window that were present in the last window are CF Montreal’s Zachary Brault-Guillard, FC Eindhoven’s Charles-Andreas Brym, Columbus Crew SC’s Liam Fraser, and Jahn Regensburg’s Scott Kennedy. However, there was one notable absence, unfortunately. That is Junior Hoilett, a winger for Reading in the EFL Championship in England. Like the previous window, Hoilett will be sitting out of this window because of injury.

Canada will miss Hoilett. He scored a fantastic goal against Costa Rica in the Gold Cup. The same team the CanMNT will face first in the November window.

Not much changed from the CanMNT November roster with the October roster. Only that the size of the roster decreased with notable omissions of Hoilett and the surprising addition of Ugbo. Still, even with no Hoilett, the CanMNT has the talent and the skill to possibly get all six points in this window. Taking advantage of these matches will be key as Canada will play four of their last six Octagonal World Cup qualifying games on the road.

The CanMNT will play on November 12 against Costa Rica and November 16 at Commonwealth Stadium in Edmonton, Alberta. The games will be televised nationally on Sportsnet and will also be shown live on Telus and OneSoccer. Both games kick-off at 9:05 p.m. ET.

Photo credit to Canada Soccer by Martin Bazyl on October 13, 2021.