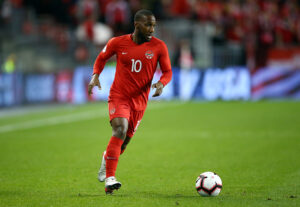 The CanMNT made history on Tuesday night against Haiti in Bridgeview, Illinois at SeatGeek Stadium. For the first time since the 1998 World Cup qualifying cycle, Canada is in the final stage of World Cup qualifying. Haiti goalkeeper Josué Duverger played a big role in the game remaining scoreless after the first half ended. However, CanMNT took over in the second half and won the two-legged aggregate 4-0.

CanMNT made history with a big win over Haiti

Full Game Summary:#CanMNT was the better team with 18 shots and nine shots on goal.

A tremendous second half gives Canada the win over #KiteBoullaWoule.

CanMNT dominated the game against Haiti

The Canadians dominated the shots on goal in both halves against Haiti. In the first half, Canada had eight shots and five of them were on target.

Unfortunately for Canada, Haiti goalkeeper Duverger stepped up. He made five saves in the first half. This included stopping three straight shots in the 31-minute from Canadian Jonathan David. Then in the 44-minute, Carlens Arcus of Haiti made a fantastic play blocking a sure goal from Steven Vitória.

Canada also had more shots and shots on goal than Haiti in the first half. This was also true in the game as a whole. Canada ended up with 58 percent of the possession. Canada also had 14 corners compared to Haiti’s three corners in the game. Lastly, Canada won 79 duels while Haiti only won 54 duels.

46′ #KiteBoullaWoule‘s goalkeeper Josué Duverger gives up an own goal! This gives #CanMNT a great chance to advance to the final stage of Concacaf #WCQ2022 qualifying.#CANvHAI | 1-0 (2-0) | #CWCQpic.twitter.com/a9vLIE1rZs

The difference in this game specifically took place in the second half. Canada got three goals in the second half, including an own goal by goalkeeper Duverger. Fortunately, for Haitian goalkeeper Duverger, his blunder was not the main reason Canada made the octagon. It was the relentless pressure from Canada. They ended up with 18 shots with nine of them hitting the target.

Thanks to a Haitian mistake, Cyle Larin took the ball. He was alone in a breakaway with Haitian goalkeeper Duverger. In the end, Larin beat Duverger and put the ball into the back of the net. This goal basically sealed it for Canada. CanMNT would add another goal thanks to the services of late substitute Junior Hoilett. It is good to see him back for Canada after getting injured in Canada’s 0-7 win over Aruba on June 5.

The Haitians did not generate many scoring chances

The Haitians had trouble generating chances against the Canadians. They had four shots and only one shot on target. Duckens Nazon had the first chance of the game in the 12-minute. However, his shot was off target. Then in the 21-minute, Steeven Saba got a shot off, but it went straight to Canadian goalkeeper Milan Borjan.

In both halves, Haiti kept turning over the ball on their side of the field. Because of that, it was hard for Haiti to generate any meaningful scoring opportunities when they were forced to defend throughout the entire game. This can be seen with Cyle Larin’s goal, which was created off a Haitian turnover. Furthermore, the pressure Alphonso Davies put on the Haitian defence played a big role in Haiti getting very few scoring opportunities.

CanMNT makes history in a 3-0 win at SeatGeek Stadium

Canada makes the final round of World Cup qualifying

When including Canada’s 0-1 win in Port-au-Prince, Haiti at Stade Sylvio Cator, Canada won the two-legged tie 0-4 against Haiti. The first leg ended up being closer than the second leg, which was to be expected and was predicted in the Canada v. Haiti preview article.

The last time CanMNT played a game in the final round was on November 16, 1997. In this game Canada lost 3-1 at Estadio Nacional in San José, Costa Rica. They will now once again participate in the final round of World Cup qualifying. Yes, four players were missing from the Haitian national side because of Visa issues. Adding to that the goalkeeper of the Haitian team made a blunder in the 46-minute.

While there is some sympathy for that, Haiti did capitalize on Canada’s mistake in the 2019 Concacaf Gold Cup. It made up for what happened in the last Gold Cup and how it ended for the Canadian men’s national team. It is also important to keep the Haiti team in mind next month. If Haiti qualifies for the 2021 Concacaf Gold Cup, they will be grouped with the U.S., Martinique, and Canada.

The significance and legacy of Tuesday’s result against Haiti

Can Canada qualify for the FIFA World Cup? They certainly do have a legitimate chance to make the World Cup. They will be in it tough though with more experienced teams like Mexico, the U.S., and Costa Rica being involved.

This week though should be a celebration of what CanMNT had achieved. Starting in March, Canada had five clean sheets in six games. It also shows Concacaf that defence is not a weakness with the CanMNT. This includes getting clean sheets against tougher Concacaf nations like Suriname and twice against Haiti.

For the CanMNT soccer fans, get today’s newspaper and keep it safe as one very valuable and important possession. This is a moment that one may want to share with kids and grandkids down the line. This is also a special moment that everyone should cherish. Lastly, this game means that these current CanMNT players can be called the “Golden Generation.”

The post CanMNT made history against Haiti with a 3-0 win at SeatGeek Stadium appeared first on Last Word On Soccer.