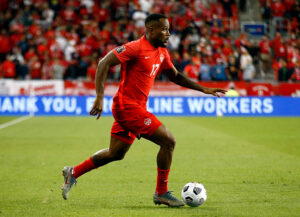 EDMONTON, AB – The CanMNT hold off Mexico as Cyle Larin scored two goals. It was a fantastic result, and the first time Canada defeated Mexico since the 2000 Concacaf Gold Cup.

Dubbed the “Iceteca”, Edmonton’s Commonwealth Stadium was the venue for the third clash between two squads quickly becoming rivals in CONCACAF. Canada fell to Mexico in the Gold Cup, before drawing 1-1 at the Azteca in October, setting up a highly anticipated rematch on home soil. Between the -9 Celsius temperature, a dump of snow and Mexico being unable to train on Monday night, a lot of outside factors weighed in on this one before a ball was kicked. A homecoming for Canada’s golden boy Alphonso Davies, who grew up in Edmonton before… well you know the story.

Starting XI for both the CanMNT and Mexico

John Herdman summoned three changes from the starting 11 that handled business in Canada’s 1-0 win over Costa Rica on Friday. Doneil Henry made his way into the fold for the first time since a 0-0 draw against Jamaica. Atiba Hutchinson won his starting spot back from Mark-Anthony Kaye as he captained his side while surpassing Julian De Guzman for all-time appearance leader with 90 caps. Then joining a front three of Alphonso Davies and Tajon Buchanan, Cyle Larin replaced Friday’s goalscorer Jonathon David upfront. It worked out to a 3-4-3 with an option to drop back into a 5-4-1, given the versatility of Ritchie Laryea and Sam Adekugbe.

For the visiting “El Tri”, Gerardo Martino also made three changes to the side that lost 2-0 to the United States last time out. Nestor Araujo and Jorge Sanchez come into the backline to create a five at the back. Orbelin Pineda joins Héctor Herrera and Edson Alvarez in the middle of the park, with Raul Jiminez the lone striker upfront. The two sides played for the top spot in the Octogonal standings after the U.S. drawing with Jamaica 1-1.

A chippy opening 15 minutes with nothing more than a couple of easily collectable crosses for Ochoa in the net. Doneil Henry picked up two warnings before a yellow card, including a crunching challenge on Hirving Lozano. Lozano quickly followed Henry into the referee’s book, after going through the back of Stephen Eustáquio in the middle of the field. A precautionary substitution saw Henry make way for Steven Vitória, with little other action in the first 45 minutes.

WHO OTHER THAN CYLE LARIN? CANADA TAKE THE LEAD JUST BEFORE THE HALF.

Stoppage time of the first 45 minutes however, now that’s a different story. A bobbling ball fell to the foot of Alistair Johnston from well over thirty yards out (link of the goal from OneSoccer). The natural instinct for any centre back in that spot took over to shoot, and let rip an effort, with Ochoa getting a hand to it but spilling the rebound. Cyle Larin won the foot race and buried the opener on the stroke of halftime. Canada’s 10-goal out of their last 14 was scored by two passes or less, but it was enough to give the hosts the halftime lead.

No more than seven minutes into the second half, Canada was able to double their lead from a set piece. A wonderfully whipped-in ball by Eustáquio found a streaking Larin who poked home his second of the night from close range. Now level with Dwayne De Rosario, Larin’s 22nd for his country has him tied for most goals all-time for the men’s team. His 14th goal of 2021 set Commonwealth stadium alight, setting up a snow pile celebration with his teammates. But the night was far from over at that point.

Mexico kicked it all up a gear but Milas Borjan stood strong to the task, preserving his team’s two-goal advantage with numerous well-held saves from Canada’s number one. A couple of fast breaks from Davies, Buchanan and Laryea but were dealt with by a compact Mexican defence throughout the second half. Not giving up and rolling over just yet, Mexico was able to pull one back in the 89-minute. Jesus corona whipped in a cross from the edge of the box to a number of unmarked Mexicans at the penalty spot. Herrera was able to bury his header into the far corner, setting an anxious tone for the final few minutes in Edmonton.

A late flurry in Canada’s six-yard box ended with Jorge Sanchez’s effort being parried off the line by Borjan with some calls for the ball crossing the goal line. No VAR and a number of replays showed the ball never crossed the line, and with that, the final whistle blew.

Next up as the CanMNT hold off Mexico

Repeat after us: Top of the table!#CANMNT #WCQ #ForCanada pic.twitter.com/kCvqBZu6uW

For the victors, Canada will be able to bathe in their revenge for some time, with the next qualifying window set for late January. A trip to Honduras, a home clash against the United States and then on the road in El Salvador is what’s in store for the Octagonal leaders. As for Mexico, a chance to regroup after picking up zero out of a possible six points this window. An away trip to Jamaica before hosting the two teams below them in Costa Rica and Panama.

A historic night for Canadian soccer, in the midst of a coming-out party, bursting onto the world’s stage in full voice. Backed by well over 40,000 in Edmonton, and plenty more from coast to coast to coast. That double from Cyle Larin will live long in the memory of all those who witnessed, edging Canada closer and closer to their end goal. Qatar.

The post CanMNT hold off Mexico with a Cyle Larin double appeared first on Last Word On Soccer.