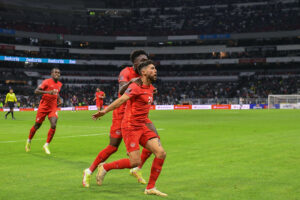 MEXICO CITY, MEXICO – The CanMNT was the best team in the first half at the Estadio Azteca. They were not as dominant in the second half. However, that was expected on the road against a team like Mexico.

The CanMNT gets a massive result at Estadio Azteca

Full Game Summary: #CanMNT was the better team but did not take advantage of their chances.

Both teams played well defensively, especially Steven Vitória.#PasiónyOrgullo played better in the second half. Scoring chances were not as dangerous.#MEXvCAN | 1-1 | #CWCQ2022

Canada started well early. In the first minute, Tajon Buchanan got past a Mexican player, but his pass went straight to the goalkeeper. In the seventh minute, Ander Herrera’s shot was stopped by Maxime Crépeau. Canada had the majority of the possession in the first seven minutes. Excellent defence by Canada, who intercepted the ball when Mexico was on the attack.

Lozano almost scored in the 18-minute as they almost capitalized on a Mark-Anthony Kaye turnover in the 18-minute. Canada made some uncharacteristic turnovers with the ball early in the game. In the 21-minute, Buchanan made a terrific run to Alphonso Davies but could not get a good touch to the ball.

21’ #PasiónyOrgullo scores! Jorge Sánchez scores the opening goal thanks to a fantastic team play! The goal was assisted by Hirving Lozano. #MEXvCAN | 1-0 | #CWCQ2022pic.twitter.com/YTMxFSE3uv

This was a preventable goal by the CanMNT. However, it also showed how dangerous the Mexican team can be. The Mexicans strung some passes that lead to the goal. Hirving Lozano, who was probably the best player for Mexico, made a terrific pass to Jorge Sánchez, who put the ball into the back of the net.

42’ #CanMNT ties it! Jonathan Osorio gets a terrific pass from Alphonso Davies and puts the ball into the back of the net! #MEXvCAN | 1-1 | #CWCQ2022pic.twitter.com/xxPtoigKCQ

Stephen Eustáquio delivered a terrific cross pass to Steven Vitória in the 40-minute, which did not go into the back of the net. However, Canada would finally get their goal. This was thanks to a terrific pass by Alphonso Davies. Jonathan Osorio got to the ball and shot it past Mexican goalkeeper Guillermo Ochoa.

In the 50-minute, Canada should have gotten a foul as Davies was fouled. Mexico played better in the second half and had more of the possession. Canada though did not back down and played excellent defence. An example was in the 52-minute, 80, and 86-minute with Vitória and the 70-minute with Richie Laryea.

Buchanan made a terrific pass but Davies could not handle it. It felt like all the shots in the second half by Mexico went straight to CanMNT goalkeeper Crepeau. Mexico’s best player might have been Lorenzo, as he neutralized a few of Canada’s threatening attacks.

Another one in the books

This is how every national team stands after today’s Final Round matches. ¿Any surprises? See you all on Sunday! #CWCQ pic.twitter.com/N5JeLZwZDZ

CanMNT got a result on the road against the two best teams in Concacaf. Along with September’s result against the U.S., Canada got two big results. What this shows is the quality Canada possess currently with Davies and Buchanan.

The CanMNT defence was exceptional. In the second half, Canada played their hearts out defensively. Vitória was probably the player of the game. His most remarkable defensive play was in the 64-minute. In that play, the ball hit the post and Vitória was there to clear just ahead of a Mexican player.

The post CanMNT got a huge result with a tie at Estadio Azteca appeared first on Last Word On Soccer.