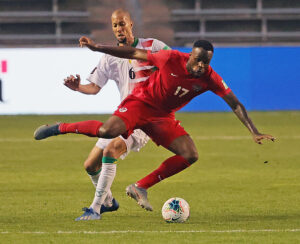 The CanMNT faces Martinique to start off their 2021 Concacaf Gold Cup campaign. Martinique is the only one of four teams in the group, which is not a FIFA member. This is because they are a French overseas territory. They are currently ranked 11th in Concacaf while the CanMNT is ranked 70th in FIFA. This puts Canada as 7th ranked in Concacaf according to the FIFA rankings.

The CanMNT faces Martinique in the 2021 Concacaf Gold Cup

However, that was not the case in the 2013 Concacaf Gold Cup. The wonderful goal scored by Fabrice Reuperné was the game-winner against CanMNT in 2013. Martinique also got one win each in the 2017 and 2019 Concacaf Gold Cups. The CanMNT has notable omissions to their roster including Lille OSC player Jonathan David, Rangers Football club player Scott Arfield, and Beşiktaş J.K. player Atiba Hutchinson. They also will not have FC Bayern Munich’s Alphonso Davies, as he hurt his ankle through injury earlier this week.

Lastly, Red Star Belgrade goalkeeper Milan Borjan is also not on the roster. Even so, this is still a talented team with many of their top players playing in Europe like Beşiktaş J.K.‘s Cyle Larin on the Gold Cup roster. In addition, they also have added Toronto FC player Ayo Akinola to the roster. There was a debate on whether Akinola will play for Canada or the U.S. Thankfully, for Canadian fans, he has committed to the Canadian men’s national program.

Their best performance was winning the Gold Cup in 2000. CanMNT defeated CONMEBOL guest nation Colombia 2-0 in the final. They also won the Concacaf Championship, the predecessor to the Concacaf Gold Cup in 1985. Right now, CanMNT will look to make the semi-finals stage of the Concacaf Gold Cup for the first time since 2007. They had a chance to do so against Haiti in 2019. Unfortunately, the CanMNT collapsed and gave up a 0-2 lead, and ended up losing the game 3-2 to Haiti. Canada will be looking to rectify a wrong and prove that they belong with the elite of Concacaf.

Their biggest accomplishment was making the quarterfinals of the 2002 Gold Cup. Ironically, in that tournament, they were eliminated by then the defending Gold Cup champions Canada in penalties. This was the only time Martinique made the knockout stages of the Gold Cup.

Martinique may feel they have a chance to make the knockout stage for only the second time in the country’s history. Unfortunately, they will need to defeat one or two of Haiti, Canada, and the U.S. in order to accomplish that. It is a tall task and might be too much to ask for Martinique. When looking at the Concacaf rankings, the U.S. is second, Canada seventh, and Haiti eighth. Martinique currently has the lowest ranking of the four teams.

They also played extremely well against Mexico in the 2019 Concacaf Gold Cup. They lost the game 3-2 against Mexico. A fantastic game for Martinique and a game CanMNT should be aware of. They should not underestimate Martinique otherwise they might be punished. Both Kévin Fortuné of AJ Auxerre and Stéphane Abaul of Club Franciscain are on the team. They both scored goals in the last Concacaf Gold Cup in 2019. In that Gold Cup, both these players scored in a 0-3 win over Cuba. There is also Emmanuel Rivière, who scored a key goal against Honduras to get a tie at Stade Pierre-Aliker in Fort-de-France, Martinique. Martinique ended up tying that game against Honduras.

THIS WEEKEND on OneSoccer

#CanMNT return to action as their Concacaf #GoldCup21 campaign kicks off vs. Martinique

Can Alphonso Davies and his Canadian team replicate the successes of 2000?

The entire 2021 Gold Cup is available on

Of the three teams, Martinique is by far the weakest team in the group. That is if one was looking at the rosters. Group stage and knockout games can produce interesting results though. Martinique almost tied with Mexico in the last Concacaf Gold Cup. Canada will need to keep that in mind and win against Martinique. Both teams had faced each other four times. The CanMNT currently has the slight advantage with two wins, one loss, and one draw against Martinique.

Prediction: The CanMNT wins this game against Martinique 3-0.

The game will kick off at 6:30 p.m. ET on July 11. All CanMNT group stage games will take place at Children’s Mercy Park in Kansas City, Kansas. The CanMNT-Martinique game can be watched on OneSoccer.